: a clock in basketball that displays a countdown of the time within which shooting the ball is required

Recent Examples on the Web His 3-pointer with the shot clock winding down and the Wildcats ahead by just two points (68-66) in the late stage arguably was the game's most important play. —

Ryan Black, The Courier-Journal, 4 Dec. 2022 But Jeremy Roach made a three as the shot clock expired to send the Blue Devils to the locker room with a halftime lead. —

oregonlive, 24 Nov. 2022 The Flyers then got the ball in but Elvis did not get the corner jumper off before the shot clock expired. —

Jeff Potrykus, Journal Sentinel, 23 Nov. 2022 Phoenix’s first score, a layup by Brianna Turner at the 9:16 mark, was taken back after officials deemed the ball didn’t leave Turner’s hand before the shot clock expired. —

Chloe Peterson, The Arizona Republic, 14 July 2022 That included a fadeaway jumper as the shot clock expired to get the lead back to six plus a couple of 3-pointers. —

Steve Megargee, Hartford Courant, 13 May 2022 The possession finally ended with Murray slipping on a drive, then recovering to find Poeltl for a layup as the shot clock expired again. —

Jeff Mcdonald, San Antonio Express-News, 28 Mar. 2022 Mennenga grazed the bottom of the rim as the shot clock expired with 51.3 seconds to play, and refs blew a whistle to stop play and ruled it a violation. —

Chris Solari, Detroit Free Press, 19 Mar. 2022 But Basile drained a triple as the shot clock expired with 1:24 left in the half as part of a 9-0 Raiders run that put Wright State in front by 10 at intermission. —

These example sentences are selected automatically from various online news sources to reflect current usage of the word 'shot clock.' Views expressed in the examples do not represent the opinion of Merriam-Webster or its editors. Send us feedback. 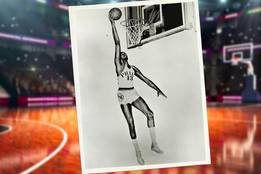