1
: a provincial governor of the Mogul empire in India
2
: a person of great wealth or prominence

In India's Mogul Empire, founded in the 16th century, provincial governors carried the Urdu title of nawāb. In 1612, Captain Robert Coverte published a report of his "discovery" of "the Great Mogoll, a prince not till now knowne to our English nation." The Captain informed the English-speaking world that "An earle is called a Nawbob," thereby introducing the English version of the word. Nabob, as it thereafter came to be spelled, gained its extended sense of "a prominent person" in the 18th century, when it was applied sarcastically to British officials of the East India Company returning home after amassing great wealth in Asia. The word was perhaps most famously used by Vice President Spiro Agnew, in a 1970 speech written by William Safire, when he referred to critical members of the news media as "nattering nabobs of negativism."

dressed conservatively so as to make a good impression with the nabobs on the co-op's board
Recent Examples on the Web This doesn’t sound like a con artist or a relentlessly negative nabob.

Washington Post, 22 June 2021 Woody Allen, Elaine May and Larry David have all done it, turning these people into shouting caricatures, guilt givers and nabobs of neuroses.

Jason Zinoman, New York Times, 11 May 2020 All those nattering nabobs of negativism in the press were certainly guaranteed to give this speech the back of the hand, right?

Jamie Dupree, AJC.com, 31 Jan. 2018 If Tebow does not in fact disagree with Jeffress on any of these points, then his decision looks like nothing more than craven capitulation to the nattering nabobs of negativism and intolerance.

Letter Writers, Twin Cities, 11 June 2017 The incessant nattering of the nabobs back there in coach.

These example sentences are selected automatically from various online news sources to reflect current usage of the word 'nabob.' Views expressed in the examples do not represent the opinion of Merriam-Webster or its editors. Send us feedback. 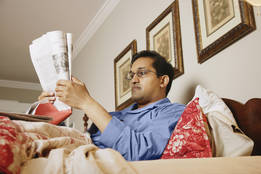 From 'bungalow' to 'shampoo'

1
: a governor of a province of the Mogul empire in India
2
: a person of great wealth or importance

More from Merriam-Webster on nabob