of a man
: to explain something to a woman in a condescending way that assumes she has no knowledge about the topic
My least favorite player was Donnie, who tried to mansplain Scrabble because he didn't recognize me and took me for a neophyte.—

Roxane Gay
Maybe a friend mansplains to you when they're commenting on the outfit you're wearing (and what you could've done differently), giving you dating advice regarding your current partner, or telling you how to care for your home—issues that, very likely, you know more about than they do.—

Megan Grant
mansplainer noun
plural mansplainers
Streep makes her voice tiny, her movements timid, and Spielberg finds endless visual ways to remind us that she's the only woman in a room full of bossy men. All leading to a scene of Graham holding up a patrician hand and waving away a room full of stunned mansplainers. — 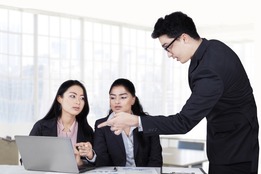