: a heterogeneous mixture : jumble
a hodgepodge of styles

the exhibit was a hodgepodge of mediocre art, bad art, and really bad art
Recent Examples on the Web Meanwhile, there have been few Republicans speaking out in defense of democracy, or even issuing hodgepodge statements on law and order. —

Prem Thakker, The New Republic, 9 Jan. 2023 As the above evidence suggests, the youthful Guardians, in their maiden season under their new nickname, are somewhat of a hardball hodgepodge. —

Jim Ingraham, Forbes, 23 May 2022 This naturally invites speculation that their relationship will be the centerpiece of her story line this season since her disastrous renovation of Chateau Gizelle has come to a hodgepodge end. —

Brian Moylan, Vulture, 9 May 2022 This hodgepodge of materials has an adverse effect on the environment, though. —

Jack Fitzgerald, Car and Driver, 10 Jan. 2023 The Schuller services, in contrast, were known for their showiness and their hodgepodge of musical styles — a service might include a choral number and a country song. —

Neil Genzlinger, New York Times, 2 Dec. 2022 It’s a hodgepodge of four singles, three of which could be considered candidates for new-standard status. —

Chris Molanphy, Vulture, 2 Dec. 2022 The result was a hodgepodge of elite troops and bedraggled conscripts, advanced tanks and battalions that were powerful only on paper. —

Thomas Gibbons-neff, New York Times, 16 Dec. 2022 Afterward, only fragments of a single battalion were left, composed of a hodgepodge of soldiers that bore little resemblance to the skilled units that had set out for Ukraine seven months earlier, Fedosenko said. —

These example sentences are selected automatically from various online news sources to reflect current usage of the word 'hodgepodge.' Views expressed in the examples do not represent the opinion of Merriam-Webster or its editors. Send us feedback. 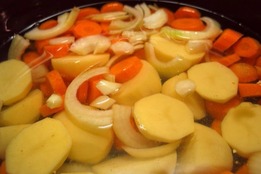 A Miscellany of Words for Whatever

Words for a little bit of everything.

More from Merriam-Webster on hodgepodge