ˈāths
1
: one that is number eight in a series see Table of Numbers
2
: octave
eighth adjective or adverb

one eighth of the pie An eighth of a pound is two ounces.
Recent Examples on the Web The citrus mealybug, Planococcus citri, is a a sap-sucking plant pest barely an eighth of an inch long. —

Elizabeth Preston, Discover Magazine, 19 Aug. 2011 Freddie Freeman delivered the crushing blow in the team’s 9-3 win against the Cincinnati Reds, lacing a leadoff double in the eighth to spark the team’s six-run game-winning rally. —

Laura Blasey, Los Angeles Times, 15 Apr. 2022 Sluchak, now in her personal capacity, hands Bell the equivalent of an eighth of an ounce of marijuana. —

Washington Post, 19 Mar. 2022 The test of the new method, which has been approved by city building officials, could cause the building to sink no more than an eighth of in inch — within the tolerance for the repair work — Hamburger wrote. —

Michael Cabanatuan, San Francisco Chronicle, 9 Oct. 2021 Naomi Osaka, a two-time U.S. Open champion who is in the same eighth of the draw as the past U.S. Open champions Sloane Stephens and Angelique Kerber. —

John Cherwa, Los Angeles Times, 26 Feb. 2021 By his example, Pong teaches Tiller to look past the superficial, which proves a useful lesson in Asia, where Tiller, despite his Asian eighth, is categorically dismissed as a bule, a farang—white, foreign. —

These example sentences are selected automatically from various online news sources to reflect current usage of the word 'eighth.' Views expressed in the examples do not represent the opinion of Merriam-Webster or its editors. Send us feedback. 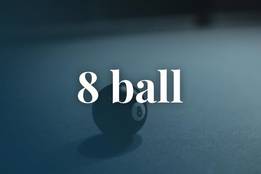 An eighth of an ounce of cocaine or some other drug

: one that is number eight in a series see number
eighth adjective or adverb

More from Merriam-Webster on eighth