1
: a faultfinding captious critic
especially : one who believes that human conduct is motivated wholly by self-interest
Of course, there will always be cynics when companies make good-faith apologies and seek to follow through.

Andrew Ross Sorkin
2
capitalized : an adherent of an ancient Greek school of philosophers who held the view that virtue is the only good and that its essence lies in self-control and independence
cynic adjective

The ancient Greece school of philosophers known as Cynics was founded by Antisthenes, a contemporary of Plato. Antisthenes is said to have taught at a gymnasium outside Athens called the Kynosarges, from which the name of the school, kynikoi, literally, “doglike ones,” may be derived. On the other hand, the name is most closely associated with the most famous Cynic philosopher, Diogenes of Sinope. Diogenes rejected social conventions and declared that whatever was natural and easy could not be indecent and therefore can and should be done in public. This shamelessness earned him the Greek epithet ho kyōn, “the dog.” In English, however, cynic and cynical have more to do with distrust of motives than shamelessness.

He's too much of a cynic to see the benefits of marriage. A cynic might think that the governor visited the hospital just to gain votes. Reporters who cover politics often become cynics.
Recent Examples on the Web Still, to call Swift a cynic might as well be sacrilege.

Lauren Puckett-pope, ELLE, 28 Oct. 2022 The prequel charts the evolution of Cassian Andor (played by Diego Luna) from an unmoored cynic to the rebel captain viewers met in the 2016 film Rogue One, but the origin story isn’t just standard fan service.

Philip Ellis, Men's Health, 16 Aug. 2022 Full-throated bulls may be hard to come by right now, but not everyone is a total cynic.

Julia Horowitz, CNN, 2 Aug. 2022 But even a cynic must admit that such visits are a lifeline to Ukraine, and a poke in the eye to a Russian leader who wanted to crush its sovereignty.

Stephen Collinson, CNN, 2 May 2022 Instead, work to become a true cynic, in its original sense.

Arthur C. Brooks, The Atlantic, 20 Jan. 2022 Only a cynic would think that the reason for this move may owe just a little to PR — and to the fact that these securities have become very hard to trade.

Andrew Stuttaford, National Review, 4 Mar. 2022 What kind of person would want to work at an online dating detective agency: a hopeless romantic, or a consummate cynic?

These example sentences are selected automatically from various online news sources to reflect current usage of the word 'cynic.' Views expressed in the examples do not represent the opinion of Merriam-Webster or its editors. Send us feedback. 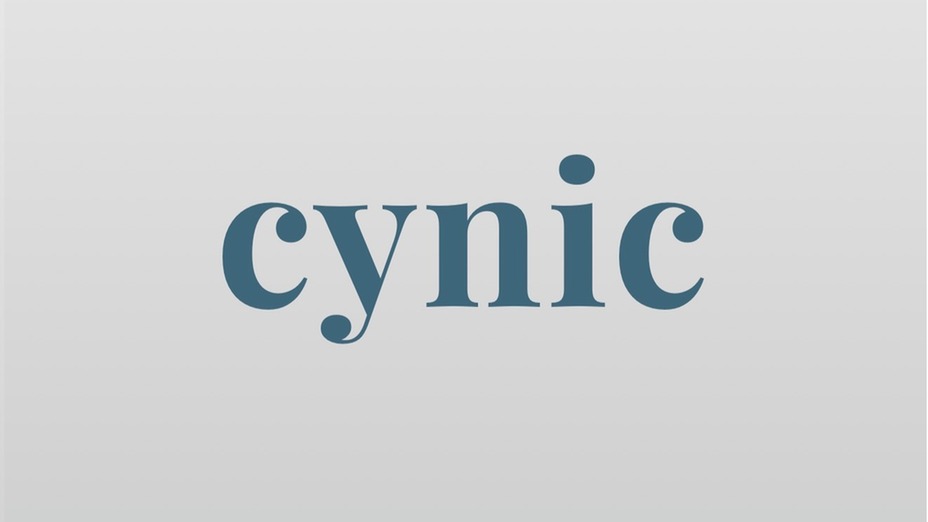 The History of 'Cynic'

How an ancient philosophical movement devoted to the pursuit of virtue came to describe eye-rolling criticism.

: a person who distrusts people
especially : one who believes that people act only in self-interest

More from Merriam-Webster on cynic