Getting in the (Subjunctive) Mood

Everything you need to know about some tricky verbs

Anyone who's learned a language will not be surprised to find out that languages have moods.

But when we're talking about the language kind of mood (which is etymologically unrelated to the other kind, btw), we're talking about verbs, and what they express. Grammatical mood can be understood as a set of forms of a verb that show what a sentence is up to—that is, whether it's making a statement, giving a command or suggestion, or expressing a wish or a possibility. 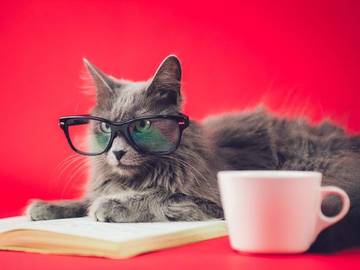 What is the Subjunctive Mood?

The Subjunctive Mood with "Be" and "Were"

There are two uses for the subjunctive that don't draw much attention. The first is in a number of set phrases that tend to be pretty formal sounding: so be it, be that as it may, come what may, suffice it to say, Heaven forbid, and others. These exist a bit like fossils in the language, always in the same form. The other uncontroversial use is in sentences like the formal and often performative "I demand that the fabulous cat be compelled to present himself during my visit." We see that use following such verbs as ask, demand, propose, suggest, and recommend, and after such phrases as it is advisable and it is necessary.

Usage of the Subjunctive

I wish I were a nerd.

And here's the indicative jumping into subjunctive territory:

I wish I was eating tacos right now.

Here's the subjunctive in action in a contrary-to-fact conditional:

me if I were a car horn:

hey the light turned green & i’m kind of in a hurry!! can you please go! only if you want though. sorry. no pressure. it’s fine seriously. sorry. are you mad at me? beep beep :)

And here's the indicative in the same situation:

The subjunctive is triggered in some cases but not in others, and not just on Twitter. We happen to have in our files a selection of contrasting examples (also featuring the helpfully obvious verb be) from the letters of the esteemed F. Scott Fitzgerald:

In those examples, wish, if, and as if triggered the subjunctive. But Fitzgerald often follows the same words with the indicative:

… as if the percentage of artists who made any kind of go of the lousy business was one to four.
— F. Scott Fitzgerald, letter, Spring 1939

Clearly there is a choice to be made here, and if Fitzgerald could use either form, so can (and do) others.

It's been several hundred years now that we've seen these examples of the indicative settling down in neighborhoods that were formerly exclusively subjunctive, with was competing with the older subjunctive were in wishes and in hypothetical and other unreal statements. We don't know what accounts for it, but the pull toward was is probably abetted by the near invisibility of the subjunctive; it doesn't have any distinctive forms, and often the forms it takes are identical to the forms the indicative takes in similar contexts.

The subjunctive doesn't, however, seem to be in a hurry to complete its supposed disappearing act from the living language. It's still easy to find in casual writing as well as in formal prose. And we see too that its forms even get pulled into service by conditional conjunctions like if, as if, and as though in cases where the mood isn't actually subjunctive:

They asked if I were apprehensive about visiting the fabulous cat, given her frequent refusal to grant visitors an audience.

The were says "subjunctive" but the if is not conditional; it's merely introducing the question about apprehension that may or may not factually exist. Such examples are considered to be hypercorrections by those who notice them, but it's likely few people do.

The histories of 'dot-com,' 'grunge,' and other words of the nineties

Here are some of the words we're currently looking at for a spot in the dictionary.

The Hilarious History of 'OK'

The English language's most successful export is a joke