1
a
: to move along on foot : advance by steps
b
: to come or go easily or readily
c
: to go at a walk
d
: to go on foot for exercise or pleasure
2
baseball : to advance to first base by taking four pitches that are balls (see ball entry 1 sense 4a) : to go to first base as a result of a base on balls
3
: to avoid criminal prosecution or conviction
walked on a technicality
4
a
: walk out
walked over problems with management
b
: to pursue a course of action or way of life : conduct oneself : behave
walk warily
c
: to be or act in association : continue in union
the British and American peoples will … walk together side by side … in peace Sir Winston Churchill
5
of an astronaut : to move about in space outside a spacecraft
6
of an inanimate object
a
: to move in a manner that is suggestive of walking
b
: to stand with an appearance suggestive of strides
pylons walking across the valley
7
a
of a spirit : to move about in visible form : appear
b
of a ship : to make headway
c
obsolete : roam, wander

1
a
: to cause (an animal) to go at a walk : take for a walk
walking a dog
b(1)
: to cause to move by walking
walked her bicycle up the hill
(2)
: to haul (something, such as an anchor) by walking round the capstan
2
a
: to accompany on foot : walk with
walked her home
b
: to compel to walk (as by a command)
c
: to bring to a specified condition by walking
walked us off our feet
3
: to follow on foot for the purpose of measuring, surveying, or inspecting
walk a boundary
4
: to move (an object) in a manner suggestive of walking
5
a
: to pass on foot or as if on foot through, along, over, or upon : traverse, perambulate
walk the streets
walk a tightrope
b
: to perform or accomplish by going on foot
walk guard
6
baseball : to cause (a batter) to advance to first base by pitching four balls : to give a base on balls to
7
: to perform (a dance) at a walking pace
walk a quadrille

plural walks
1
a
: an act or instance of going on foot especially for exercise or pleasure
go for a walk
took a long walk around the neighborhood
see also take a walk
b
: space walk
2
: a place designed for walking:
a(1)
: a path specially arranged or paved for walking
(2)
: sidewalk
b
: a public avenue for promenading : promenade
c
: a railed platform above the roof of a dwelling house
d
: ropewalk
3
: distance to be walked
a quarter mile walk from here
4
: an accustomed place of walking : haunt
5
: a place or area of land in which animals feed and exercise with minimal restraint
6
baseball : an advance to first base awarded to a baseball player who during a turn at bat takes four pitches that are balls (see ball entry 1 sense 4a) : base on balls
7
: characteristic manner of walking
his walk is just like his father's
8
British : a ceremonial procession
9
a
: a low rate of speed
the shortage of raw materials slowed production to a walk
b
: the gait of a biped in which the feet are lifted alternately with one foot not clear of the ground before the other touches
c
: the gait of a quadruped in which there are always at least two feet on the ground
specifically : a 4-beat gait of a horse in which the feet strike the ground in the sequence near hind, near fore, off hind, off fore
10
: a route regularly traversed by a person in the performance of a particular activity (such as patrolling, begging, or vending)
11
a
: social or economic status
all walks of life
b(1)
: range or sphere of action : field, province
(2)
: vocation
12
: manner of living : conduct, behavior
13
: an easy victory
won in a walk
Phrases
walk away from
1
: to give up or leave behind willingly : abandon
2
: to survive (an accident) with little or no injury
3
: to outrun or get the better of without difficulty
walk off with
1
a
: to steal and take away
b
: to take over unexpectedly from someone else : steal sense 1d
walked off with the show
2
: to win or gain especially by outdoing one's competitors without difficulty
walk on
: to take advantage of : abuse
walk on eggshells or walk on eggs
: to exercise extreme caution
walk over
: to treat contemptuously
walk the plank
1
: to walk under compulsion over the side of a ship into the sea
2
: to resign an office or position under compulsion
walk through
1
: to go through (a theatrical role, a familiar activity, etc.) perfunctorily (as in an early stage of rehearsal)
2
: to guide (someone, such as a novice) through an unfamiliar or complex procedure step-by-step
3
: to deal with or carry out perfunctorily
walk in the park
: an easy or pleasurable experience

Verb Is your grandson walking yet? He walks home from school every day. It's not far; you can walk there in five minutes. It was a while after the accident before she could walk again. He walked away without saying goodbye! She turned and walked away from him. The driver walked away from the accident unharmed. They walk around the neighborhood every morning for exercise. We walked around the city all day seeing the sights. He walked to the store. Noun The cliff walk along the ocean is very popular. Many exotic plants can be found along the walk. See More
Recent Examples on the Web
Verb
Many of the line’s pieces—such as the Ice Flow Long Sleeve and Ice Flow Legging—are ideal as a second layer for the outdoor enthusiast who loves to hike, walk, run, and explore in colder weather. Rachel King, Fortune, 26 Nov. 2022 Every chapter draws you deeper into this world where humans walk side by side with the beings from lore. Mary Cadden, USA TODAY, 26 Nov. 2022 What happens when a WWE Hall of Famer, a former The Voice host and award-winning country music singer walk into a bar? Chaise Sanders, Country Living, 25 Nov. 2022 Their compression short/boxer brief hybrids are comfortable enough to run a few miles or walk around the office all day. Christian Gollayan, Men's Health, 25 Nov. 2022 Kim, Kris, and North head to Paris, where Kim will walk the Balenciaga runway. Mj Corey, Vogue, 24 Nov. 2022 The paper builds on work from 2018 that helped three people walk again. Will Sullivan, Smithsonian Magazine, 23 Nov. 2022 Perfect for the 113th annual Thanksgiving Day Race run or walk. The Enquirer, 23 Nov. 2022 For their entire lives, this has been a game that everybody makes a big deal about up until the moment the Buckeyes walk away victorious while the Wolverines once again end their season in disappointment. Stephen Means, cleveland, 23 Nov. 2022
Noun
Chrostowski remembers there were no walk-in coolers; everything came in fresh every day. Marc Bona, cleveland, 26 Nov. 2022 At the same time, general manager Perry Minasian knows the team is up for sale and that Shohei Ohtani is entering his walk year. Peter Abraham, BostonGlobe.com, 26 Nov. 2022 Before venturing upstairs, however, a walk down the hall that ultimately leads to the kitchen and great room is in order. James Alexander, Hartford Courant, 26 Nov. 2022 The Oregon players made a slow, painful walk off the field at Reser Stadium on Saturday, making their way past celebrating players through excited students. Ken Goe For The Oregonian/oregonlive, oregonlive, 26 Nov. 2022 Al Bayt Stadium, a 40 minute drive north of the capital and designed like a desert tent, requires a trip to the end of one metro line, and a 25-minute bus ride followed by a 15 minute walk. Lauren Tierney, Washington Post, 26 Nov. 2022 The Naperville Garden Club will host its 60th Cup of Cheer house walk, holiday market and tea from 9 a.m. to 4 p.m. Thursday and Friday, Dec. 1-2. Michelle Mullins, Chicago Tribune, 25 Nov. 2022 Go back to normal eating, and maybe add in a long walk for good measure. Arthur C. Brooks, The Atlantic, 24 Nov. 2022 Just beyond the doors of the hotel lies the historic Ponte Vecchio over the Arno River; a five-minute walk takes you to the Piazza della Signoria or to the Uffizi Gallery, with its repository of priceless art treasures. Robb Report Studio, Robb Report, 23 Nov. 2022 See More

These example sentences are selected automatically from various online news sources to reflect current usage of the word 'walk.' Views expressed in the examples do not represent the opinion of Merriam-Webster or its editors. Send us feedback.

Middle English walken "to roll, toss about (of the sea, waves), wander, journey, go, go on foot, stroll, move about on earth (of a dead person's spirit), be in motion, circulate, be present, live," going back to Old English wealcan (strong verb) and wealcian (weak verb) "to toss about, work with the hands, turn over (in the mind), (of waves or the sea) to roll, surge," going back to Germanic *walkan- (whence also Middle Dutch walken "to knead, full [cloth]," Old High German giwalchen "fulled, thickened," as weak verbs Old Icelandic válka "to roll, stamp," velkja "to toss about"), of uncertain origin

Note: The Middle English verb experienced a remarkable degree of semantic diversification not paralleled in other Germanic languages, taking it far from its Old English sources, and leading to the usual modern meaning "to go by foot"; see detailed discussion of forms and meanings in Oxford English Dictionary, third edition. — The Germanic verb *walkan- has been compared with Sanskrit válgati "(s/he) leaps, bounds, (it) surges," and, more remotely, Latvian val͂gs "rope." However, as pointed out by G. Kroonen (Etymological Dictionary of Proto-Germanic, Brill, 2013), there is a parallel verb *walgōn- evident in Middle Dutch walghen (in mi walghet "I feel nauseous"), Middle Low German walgen "to wrestle, strive," Old High German walgōn "to roll." If this etymon goes back to Indo-European *u̯olgh-, it cannot be related to the Sanskrit verb. Both *walkan- and *walgōn- have been seen as representing root extensions of Indo-European *u̯el- "roll"; see welter entry 1.

12th century, in the meaning defined at intransitive sense 7c 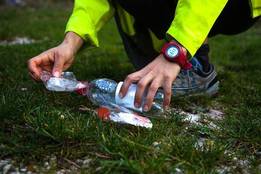 ˈwȯk
1
: to move or cause to move along on foot at a natural slow gait
walk to town
walk a horse up a hill
2
: to pass over, through, or along by walking
walk the streets
3
: to perform or accomplish by walking
walk guard
4
: to take or cause to take first base with a base on balls
walk off with
1
: steal entry 1 sense 2
2
: to win or gain especially without difficulty
walked off with the state championship
walk over
: to disregard the wishes or feelings of

1
: a going on foot
go for a walk
2
: a place, path, or course for walking
3
: distance to be walked
it's a long walk
4
a
: manner of living : conduct, behavior
b
: social or economic status
various walks of life
5
a
: manner of walking
b
: a way of moving by a four-footed animal in which there are always at least two feet on the ground
especially : a slow way of moving by a horse in which the feet strike the ground in the sequence of left hind foot, left front foot, right hind foot, right front foot
6
: base on balls
walk in the park
: an easy or pleasurable experience : picnic

More from Merriam-Webster on walk