vi·​sion ˈvi-zhən
1
a
: the act or power of seeing : sight
b
: the special sense by which the qualities of an object (such as color, luminosity, shape, and size) constituting its appearance are perceived through a process in which light rays entering the eye are transformed by the retina into electrical signals that are transmitted to the brain via the optic nerve
2
a
: something seen in a dream, trance, or ecstasy
especially : a supernatural appearance that conveys a revelation
b
: a thought, concept, or object formed by the imagination
c
: a manifestation to the senses of something immaterial
look, not at visions, but at realities Edith Wharton
3
a
: the act or power of imagination
b(1)
: mode of seeing or conceiving
(2)
: unusual discernment or foresight
a person of vision
c
: direct mystical awareness of the supernatural usually in visible form
4
a
: something seen
b
: a lovely or charming sight
visional
ˈvizh-nəl
ˈvi-zhə-nᵊl
adjective
visionally adverb

Noun We had visions of fame and fortune. the architect's vision for the new building She had a clear vision of what she wanted to do. He had a vision of Christ. The idea came to me in a vision. Verb visioned her idea of the perfect meal See More
Recent Examples on the Web
Noun
Your vision and dedication to fighting for Americans has made our country a better place. Greg Cannella, CBS News, 17 Nov. 2022 After many false starts, Mr. Safdie was only able to replicate his vision as a high-end apartment complex in Singapore. Belinda Lanks, WSJ, 17 Nov. 2022 Kelman says Lyft still wants to change the world, but its vision now looks a bit more like the status quo. WIRED, 17 Nov. 2022 As more and more people flee the ailing social media company, the world’s richest man is now tasked with finding a team of engineers willing to work long hours at high intensity to make Twitter into his vision of a free-speech town square. Sophie Mellor, Fortune, 16 Nov. 2022 Many cats of prey have eyes that are similarly circled—an adaptation, honed over wild millennia, that helps sharpen their vision for the hunt. Megan Garber, The Atlantic, 16 Nov. 2022 The entire business is transitioning to worker ownership, which Assil says is crucial to her long-term vision for the company. Elena Kadvany, San Francisco Chronicle, 16 Nov. 2022 Yu Kongjian, who spoke to The Associated Press in Beijing, uses sweeping language to express his vision for cities that can withstand variable temperatures, drought and heavy rainfall. Emily Wang Fujiyama, ajc, 15 Nov. 2022 Redfield predicted that their vision was the future of conservatism. Antonia Hitchens, The New Yorker, 14 Nov. 2022
Verb
In 2019, under the guidance of Assembly Chair Felix Rivera, the Assembly hired Laurie Wolf to facilitate a series of three strategic visioning meetings to better define our goals for years 2019-2021. Anchorage Daily News, 28 Mar. 2020 At 80, Larry Ginter, a longtime organizer who participated in November’s visioning session, isn’t old enough to remember the original New Deal. Kate Aronoff, The New Republic, 31 Jan. 2020 Nobody was more tunnel-visioned than Helton, who did not look up at the visitors. Los Angeles Times, 20 Sep. 2019 But Korff won’t hold off for the city’s visioning effort to be completed. John Hilliard, BostonGlobe.com, 8 Aug. 2019 Landscape architect Christine Wilson of Copley Wolff Design Group created a conceptual design for the pocket park using community input, including through a site visit and a visioning workshop with nearby residents in the fall of 2018. John Laidler, BostonGlobe.com, 7 Aug. 2019 The plan was born out of a 2008 community visioning exercise conducted by the Oak Park-River Forest Community Foundation. Steve Schering, chicagotribune.com, 23 July 2019 Upcoming dates: July 16, Aug. 20 (open house/visioning session), Sept 17, and Oct. 15. Karen Huppertz, ajc, 21 June 2018 River Forest residents are invited to provide their input at a visioning workshop that will help shape the village’s future with the creation of a comprehensive plan. Steve Schering, chicagotribune.com, 10 Apr. 2018 See More

These example sentences are selected automatically from various online news sources to reflect current usage of the word 'vision.' Views expressed in the examples do not represent the opinion of Merriam-Webster or its editors. Send us feedback.

Middle English, from Anglo-French, from Latin vision-, visio, from vidēre to see — more at wit

1743, in the meaning defined above 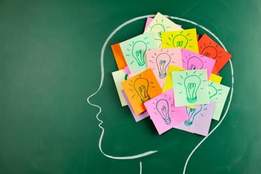 And 'mood board' too

vi·​sion ˈvizh-ən
1
a
: something seen in the mind (as during a dream)
b
: a vivid picture created by the imagination
c
: ghost
2
a
: the act or power of imagination
b
: unusual ability to think or plan ahead
people with vision building for the future
3
a
: the act or power of seeing : sight
b
: the sense by which the qualities of an object (as color, shape, and size) are perceived through a process in which light rays entering the eye are transformed into signals that pass to the brain
4
: something seen
especially : a lovely or charming sight

vi·​sion ˈvizh-ən
1
: the act or power of seeing : sight
2
: the special sense by which the qualities of an object (as color, luminosity, shape, and size) constituting its appearance are perceived through a process in which light rays entering the eye are transformed by the retina into electrical signals that are transmitted to the brain via the optic nerve

More from Merriam-Webster on vision