: to make an attempt
you can do it if you try

1
: to make an attempt at —often used with an infinitive
try to fix the car
2
a
: to put to test or trial
try one's luck
—often used with out
try out a new method
b
: to subject to something (such as undue strain or excessive hardship or provocation) that tests the powers of endurance
c
: demonstrate, prove
3
a
: to examine or investigate judicially
try a case
b(1)
: to conduct the trial of
(2)
: to participate as counsel in the judicial examination of
4
a
: to melt down and procure in a pure state : render
try out whale oil from blubber
b
obsolete : purify, refine
5
: to fit or finish with accuracy

plural tries
1
: an experimental trial : attempt
succeeded on the first try
2
: a play in rugby that is similar to a touchdown in football, scores usually five points, and entitles the scoring side to attempt a placekick at the goal for additional points
also : the score made on a try
Phrases
try one's hand
: to attempt something for the first time

afflict, try, torment, torture, rack mean to inflict on a person something that is hard to bear.

afflict is a general term and applies to the causing of pain or suffering or of acute annoyance, embarrassment, or any distress.

ills that afflict the elderly

try suggests imposing something that strains the powers of endurance or of self-control.

torment suggests persecution or the repeated inflicting of suffering or annoyance.

a horse tormented by flies

torture adds the implication of causing unbearable pain or suffering.

tortured by a sense of guilt

a body racked by pain

attempt stresses the initiation or beginning of an effort.

will attempt to photograph the rare bird

try is often close to attempt but may stress effort or experiment made in the hope of testing or proving something.

tried to determine which was the better procedure

endeavor heightens the implications of exertion and difficulty.

endeavored to find crash survivors in the mountains

will essay a dramatic role for the first time

continues to strive for peace

Verb I don't know if I can do it, but I'll try. Keep trying. You can do it. You can do it if you try hard enough. “He said he can beat you.” “I'd like to see him try!” I tried, but I just couldn't do it. “She's not in the office now.” “OK. I'll try again later.” I don't know where she is. Try calling her on her cell phone. He tried a few things to remove the stain, but nothing worked. Did you try restarting the computer? If you want to lose weight, try exercising more. Noun was granted another try at the field goal See More
Recent Examples on the Web
Verb
The stakes are high for the Justice Department, which last secured such a conviction at trial nearly 30 years ago, and intends to try two more groups on the charge later this year. Lindsay Whitehurst, ajc, 18 Nov. 2022 Corina Camacho, whose son was shot and was one of the survivors, told The Associated Press that 11 children were not killed and their families try to stay in touch. Jake Bleiberg, BostonGlobe.com, 18 Nov. 2022 Then, there are 83 hands-on experiments to try at home. Good Housekeeping, 18 Nov. 2022 University of Michigan economists Thursday said a mild recession is likely ahead in 2023, as the Federal Reserve continues to raise interest rates to try to cool down inflation. Susan Tompor, Detroit Free Press, 18 Nov. 2022 The Office of the Comptroller of the Currency has been urging banks to try to solve the issue. David Benoit, WSJ, 18 Nov. 2022 The Doctor had to team up with Andrew Garfield and a pig man to try to defeat them. Devan Coggan, EW.com, 17 Nov. 2022 The billionaire founder of Airbnb, Brian Chesky, is listing one bedroom of his San Francisco house on his online homestay rental platform to try and prove to users that being a host isn’t risky or difficult. Sophie Mellor, Fortune, 17 Nov. 2022 Whittingham and others try to motivate Lewis to continue retrieving the tee at a high level. Alex Vejar, The Salt Lake Tribune, 15 Nov. 2022
Noun
The sequel to 1931's Frankenstein, which is sitting in the United States National Film Registry, holds the role that Lanchester is most known for to this day, and Jenner might've inspired some more people to give the iconic look a try. Brenton Blanchet, Peoplemag, 29 Oct. 2022 Having excelled in concert band and the Christmas parade, this year, Jake was ready to give marching band a try. C.p. Bailey, al, 6 Nov. 2022 It’s what shows employers and payers a new offering is worth paying for, and what can help convince patients to give it a try. Mohana Ravindranath, STAT, 5 Nov. 2022 Her YouTube channel – which has more than 3 million subscribers – consists of a wide variety of lifestyle content, including clothing try-ons, makeup tutorials and music videos. Zoe Sottile, CNN, 23 Oct. 2022 Walmart didn't specify how images are stored, except to say that your images will be saved to your account and available for future try-ons. Stephanie Mlot, PCMAG, 15 Sep. 2022 Similar to Warby Parker, this online glasses store will also send five styles for a free at-home try-on, giving you five days to mull it over. Jacqueline Saguin, Good Housekeeping, 25 May 2022 Those tools will include options for booking in-store appointments, virtual try-ons and after-sales services. Demetrius Simms, Robb Report, 24 May 2022 This is a demographic that’s been trained to create items that feel unique to them and usually is presented with the choice of try-on. Yola Robert, Forbes, 17 May 2022 See More

These example sentences are selected automatically from various online news sources to reflect current usage of the word 'try.' Views expressed in the examples do not represent the opinion of Merriam-Webster or its editors. Send us feedback.

14th century, in the meaning defined at transitive sense 3a 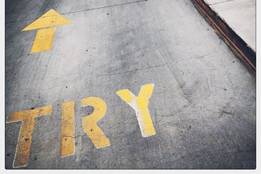 We're Going to Explain the Deal with...

Just try and stop us

ˈtrī
tried; trying
1
: to make an effort to do
I'll try to do my best
2
a
: to examine or investigate in a court of law
try a case
b
: to conduct the trial of
3
a
: to put to a test
try out something new
try your luck
b
: to test to the limit
you're trying my patience
4
: to melt down (as tallow) and obtain in a pure state : render
try out whale oil from blubber

plural tries
: an effort to do something : attempt

tried; trying
1
: to examine or investigate judicially
no fact tried by a jury, shall be otherwise reexamined in any court of the United States, than according to the rules of the common law U.S. Constitution amend. VII
in an action tried on the facts without a jury Federal Rules of Civil Procedure Rule 52(a)
2
: to conduct the trial of : put on trial
3
: to participate as lawyer or counsel in the trial of : bring to trial on behalf of a client
was unqualified to try death penalty cases

History and Etymology for try

More from Merriam-Webster on try