1
: to take place : go on, occur
2
a
: to become known or apparent : develop
b
: to be revealed : come to light
3
: to give off vaporous material
specifically : to give off or exude watery vapor especially from the surfaces of leaves
4
: to pass in the form of a vapor from a living body

: to pass off or give passage to (a fluid) through pores or interstices
especially : to excrete (a fluid, such as water) in the form of a vapor through a living membrane (such as the skin)
Can transpire mean 'to occur'?: Usage Guide

Sense 1 of transpire is the frequent whipping boy of those who suppose sense 2 to be the only meaning of the word. Sense 1 appears to have developed in the late 18th century; it was well enough known to have been used by Abigail Adams in a letter to her husband in 1775.

Noah Webster recognized the new sense in his dictionary of 1828. Transpire was evidently a popular word with 19th century journalists; sense 1 turns up in such pretentiously worded statements as "The police drill will transpire under shelter to-day in consequence of the moist atmosphere prevailing." Around 1870 the sense began to be attacked as a misuse on the grounds of etymology, and modern critics echo the damnation of 1870. Sense 1 has been in existence for about two centuries; it is firmly established as standard; it occurs now primarily in serious prose, not the ostentatiously flamboyant prose typical of 19th century journalism.

Transpire (based on Latin spirare, meaning "to breathe") was originally used technically to describe the passage of vapor through the pores of a membrane (such as the skin). From this use developed the figurative sense: "to escape from secrecy" or "to become known." That sense was used in ambiguous contexts and often meant "to happen" or "to take place."

No one will soon forget the historic events that transpired on that day. A plant transpires more freely on a hot dry day. Trees transpire water at a rapid rate.
Recent Examples on the Web Because the uncertainty of everything that was going to transpire is terrifying. —Sean Gregory, Time, 4 Jan. 2023 Wu got into office and are going to transpire in real tangible ways this spring. —Diti Kohli, BostonGlobe.com, 2 Jan. 2023 However, her new neighbor Hayden (Capri) makes Casey question her future, as a budding romance begins to transpire between the two girls. —Todd Spangler, Variety, 3 Nov. 2022 What's this going to be like, and how big of a thorn in my side is this guy going to be, and what's going to transpire here? —Sydney Bucksbaum, EW.com, 10 Oct. 2022 Reps for Peacock declined comment on their status and if any negotiations were expected to transpire to reunite all nine original stars. —Lesley Goldberg, The Hollywood Reporter, 30 Sep. 2022 Even though the bacteria in the film are dead, the researchers believe what’s allowing this process to transpire are proteins inside the bacterial cells that help move electrons around, as well as the nanowires between the bacteria themselves. —Miriam Fauzia, Popular Mechanics, 15 Aug. 2022 Yet even then, the bodily reality of what’s about to transpire is mediated by someone else’s professional expertise. —Will Self, Harper’s Magazine , 28 Sep. 2022 The movie, now on digital release, begins with the death of Tom Cruise’s Maverick, or so people theorize, making the events that transpire in the rest of the film a death dream. —Vulture, 23 Aug. 2022 See More

These example sentences are selected automatically from various online news sources to reflect current usage of the word 'transpire.' Views expressed in the examples do not represent the opinion of Merriam-Webster or its editors. Send us feedback.

1597, in the meaning defined at transitive sense 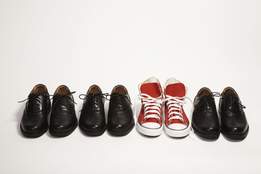 Both words mean "to happen again," but one suggests frequent or periodic repetition

verb
tran·​spire tran(t)s-ˈpī(ə)r
transpired; transpiring
1
: to pass or give off in the form of water vapor through stomata in leaves
2
: to become known or apparent : become revealed
it transpired that we had the wrong address
3
: to come to pass : happen
what transpired last night

More from Merriam-Webster on transpire