1
a
: give up sense 1
quit a job
b
: give up sense 2
quit smoking
c
: to depart from or out of
d
: to leave the company of
2
: to make full payment of : pay up
quit a debt
3
: to set free : relieve, release
quit oneself of fear
4
: conduct, acquit
the youths quit themselves like men

1
: to give up employment
2
: to cease normal, expected, or necessary action
the engine quit
3
: to admit defeat : give up

: the act or an instance of quitting a job

Is it quit or resign?

Should you quit or should you resign from your job? No matter which one you choose, it is likely that both of these actions will have the exact same effect on your future, as they are, in this sense, fairly synonymous. However, each is more likely to be found used in specific settings, so you may wish to choose your word with care. Resign is more formal, and will often be found when a person is describing relinquishing a position or office, especially if it is done in disgrace. While it would not be incorrect to say that a member of an organization's board, a king or queen, or a political leader "quit their position," it is more likely that the word resign would be employed.

stop, cease, quit, discontinue, desist mean to suspend or cause to suspend activity.

stop applies to action or progress or to what is operating or progressing and may imply suddenness or definiteness.

stopped at the red light

cease applies to states, conditions, or existence and may add a suggestion of gradualness and a degree of finality.

by nightfall the fighting had ceased

quit may stress either finality or abruptness in stopping or ceasing.

discontinue applies to the stopping of an accustomed activity or practice.

we have discontinued the manufacture of that item

desist implies forbearance or restraint as a motive for stopping or ceasing.

desisted from further efforts to persuade them

Verb She quit college after one semester. She decided to quit show business. He quit teaching after five years. Many workers are quitting because of poor pay. She hates her job and she's thinking about quitting. She quit smoking years ago. I wish you would quit bothering her. We're going to quit for the day. It's too hot to keep working. Adjective I am finally quit of that terrible task. See More
Recent Examples on the Web
Verb
But the taxers are like Terminators and never quit, and in April 2021 Democrats in the Legislature passed a 7% capital-gains tax. —The Editorial Board, WSJ, 26 Jan. 2023 Many employees have quit due to low pay, lack of benefits, harsh conditions and obnoxious customers. —Jaimie Green, Forbes, 25 Jan. 2023 Deputy Prosecutor General Oleksiy Symonenko also quit. —Andrew Meldrum, Anchorage Daily News, 24 Jan. 2023 Since day care was out of the question, Mitchell quit her job in music production and became a stay-at-home mom while her son’s father worked full-time. —Bailey Schulz, USA TODAY, 24 Jan. 2023 Mower, the former employee who confronted Thompson about his unpaid wages, quit after working for TTS for five months. —Alex Baumhardt, oregonlive, 23 Jan. 2023 But Pulliam, who has struggled with excessive weight for much of his life, quit singing in his early 20s because of concerns about body shaming in the music industry, finding work instead as a debt collector and a security guard. —Javier C. Hernández, New York Times, 23 Jan. 2023 Almost a year ago, Claire Zhu and Peter Ovendorf quit their finance jobs and gave up their apartment in Charlotte, North Carolina. —Bychloe Berger, Fortune, 22 Jan. 2023 Girls quit sports at twice the rate of boys by age 14. —Martin Fritz Huber, Outside Online, 19 Jan. 2023
Noun
There is no quit in these Sun Devils, which has to please fans. —Jeremy Cluff, The Arizona Republic, 5 Nov. 2022 Who can quiet quit with a culture—and their expectations—on their shoulders? —Trey Williams, Fortune, 6 Oct. 2022 So a lot of people quiet quit because of a bad boss. —James Brown, USA TODAY, 18 Sep. 2022 Looking specifically at construction, quit levels spiked up to reach 207,000 in November alone. —Alexandra Mcmanus, Forbes, 18 Mar. 2022 That explains the ballooning quiet quit rates among middle managers, for whom evolving hybrid workplace rules and management expectations have meant record-high levels of burnout. —Jane Thier, Fortune, 13 Oct. 2022 In April, the quit rate in the accommodation and food services sector was at 9.1%, according to data released by the U.S. Bureau of Labor Statistics. —Robin Gagnon, Forbes, 4 Oct. 2022 The Knights took the 13-0 lead into the half, but the Patriots had no quit. —Randy Mcroberts, Baltimore Sun, 16 Sep. 2022 But Abby had no quit in her, and fought her way back to the front of the field, crossing the line in first place to claim a miraculous victory. —Terry Baddoo, USA TODAY, 26 May 2022 See More

These example sentences are selected automatically from various online news sources to reflect current usage of the word 'quit.' Views expressed in the examples do not represent the opinion of Merriam-Webster or its editors. Send us feedback.

Middle English quiten, quitten, from Anglo-French quiter, from quite free of, released, from Latin quietus quiet, at rest

Middle English quite, quit, from Anglo-French

13th century, in the meaning defined at transitive sense 2

circa 1923, in the meaning defined above 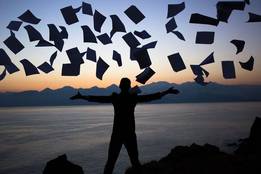 Should you 'quit' or 'resign'?

A word for when you're outta there

1 of 2 adjective
ˈkwit
: released from duty, responsibility, or penalty : free
quit of debt

2 of 2 verb
quit also quitted; quitting
1
: to make full payment to or for : repay
quit a debt
2
: conduct entry 2 sense 4
the children quit themselves well in the woods
3
a
: to depart from : leave
quit the scene of the accident
b
: to bring to an end : abandon
c
: to give up (as an action or activity) for good
quit bragging
quit a job
4
: to admit defeat : surrender

More from Merriam-Webster on quit