oc·​to·​pus ˈäk-tə-pəs
-ˌpu̇s
plural octopuses or octopi ˈäk-tə-ˌpī
1
plural also octopodes äk-​ˈtä-​pə-​ˌdēz
-​ˈtō-
: any of a genus (Octopus) of cephalopod mollusks that have eight muscular arms equipped with two rows of suckers
broadly : any octopod excepting the paper nautilus
2
: something that resembles an octopus especially in having many centrally directed branches
an octopus of a corporation which lends, buys, produces, and sells Atlantic

Recent Examples on the Web Matsunaga's catch broke the record for the largest octopus caught in Hawaii, HawaiiNewsNow reported. Ann W. Schmidt, Fox News, 24 Sep. 2022 While exploring a South African kelp forest, the diver forms an unlikely friendship with an octopus. Janaya Wecker, Town & Country, 29 Aug. 2022 The video of this octopus, Heidi, aired in 2019 as part of an episode of PBS’s Nature documentary series, and subsequently went viral. Camille Bromley, The Atlantic, 18 July 2022 My Octopus Teacher is, of course, the 90-minute documentary on Netflix about a filmmaker who forms a connection with a female octopus in the South African kelp forest. Nick Romano, EW.com, 2 June 2022 The octopus is served cold in a vinaigrette, which is a most excellent way to cool down. Esra Erol, Bon Appétit, 5 Aug. 2022 Filmmaker Craig Foster forges a friendship with an octopus in South Africa in this fascinating documentary, which won Best Documentary Feature at the 2021 Oscars. Emily Burack, Town & Country, 23 June 2022 The octopus is still, suspended upside down on the glass wall of her tank, just below water level. Camille Bromley, The Atlantic, 18 July 2022 Describing next year’s oil market doesn’t require an economist, but an octopus: on the one hand, on the other hand, on the other other hand…. Michael Lynch, Forbes, 15 July 2022 See More

These example sentences are selected automatically from various online news sources to reflect current usage of the word 'octopus.' Views expressed in the examples do not represent the opinion of Merriam-Webster or its editors. Send us feedback. 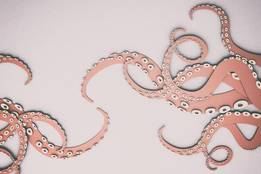 The Many Plurals of 'Octopus'

Which is correct? We'll get into it. 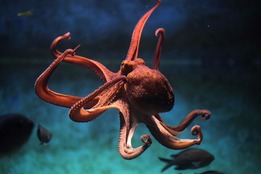 What kind of fish is Dory?

oc·​to·​pus ˈäk-tə-pəs
plural octopuses or octopi
-tə-ˌpī
: a marine animal that has a soft rounded body with eight long flexible arms about its base which have sucking disks able to seize and hold things (as prey)

More from Merriam-Webster on octopus