nem·​e·​sis ˈne-mə-səs
Synonyms of nemesis
1
capitalized : the Greek goddess of retributive justice
2
plural nemeses ˈne-mə-ˌsēz
a
: one that inflicts retribution or vengeance
Many a pursued man fell before his nemesis in the streets …—Agnes Morely Cleaveland
b
: a formidable and usually victorious rival or opponent
The team was defeated by its old nemesis.
3
plural nemeses
a
: an act or effect of retribution
… pursue them with the nemesis of outraged humanity.—Donald Culross Peattie
b
: bane sense 1
A nemesis of humankind since the first hand slapped the first cheek, mosquitoes have bitten their way into the American experience …—Jack Cox

Nemesis was the Greek goddess of vengeance, a deity who doled out rewards for noble acts and punishment for evil ones. The Greeks believed that Nemesis didn't always punish an offender immediately but might wait generations to avenge a crime. In English, nemesis originally referred to someone who brought a just retribution, but nowadays people are more likely to see animosity than justice in the actions of a nemesis.

On just the kind of putt that had been a career-long nemesis, he kept his head perfectly still and knocked the ball squarely in the hole. —Jaime Diaz, Sports Illustrated, 20 Feb. 1995 Japan and Iraq have been floated as possible successors for the role once filled by Amercia's old nemesis, the Soviet Union … —Michiko Kakutani, New York Times, 18 June 1993 In the beginning were the words, winged at first until, paralysed, they fell to earth and were imprisoned by their nemesis, the alphabet. —Erich Segal, Times Literary Supplement, 12 July 1991 Thus, once surgeons implant the new graft, tissue rejection—the unforgiving nemesis of most transplant attempts—occurs in only 3% to 5% of cases. —Christine Gorman et al., Time, 7 Dec. 1987 He will be playing his old nemesis for the championship. Batman is the Joker's main nemesis and always foils his wicked plots. See More
Recent Examples on the Web Your daughter, Lola Corfixen, plays Miu’s nemesis, Rakel. —Lane Brown, Vulture, 9 Jan. 2023 The Steelers borrowed a chapter from their nemesis’ playbook in a comeback victory over the Ravens on Sunday night, columnist @MikePrestonSun writes. —Ryan Mcfadden, Baltimore Sun, 2 Jan. 2023 All that talent didn’t matter when the Vikings lost to a nemesis, North Allegheny, late in September. —Jenny Vrentas, New York Times, 2 Jan. 2023 Tousi brought in his longtime friend, and former Nayeri nemesis, Kyle. —Tim Dickinson, Rolling Stone, 17 Dec. 2022 Police only narrowly prevented Wilde’s nemesis, the Marquess of Queensberry, from making a public scene on the first night, and its opening run was curtailed when Wilde was arrested and imprisoned for homosexual offenses. —Nicholas Frankel, WSJ, 2 Dec. 2022 And their nemesis, Dworsky, has been following it for decades. —BostonGlobe.com, 26 Nov. 2022 Sundown: The Vampire in Retreat follows Robert Van Helsing (Campbell), a descendant of Count Dracula's nemesis, who arrives in Purgatory, Arizona. —Steven Thrash, EW.com, 3 Nov. 2022 According to Lewis, that trend accelerated as authorities in the US feared that education—especially in science and math—lagged behind that of its arch nemesis, the Soviet Union. —Alka Tripathy-lang, Ars Technica, 25 Sep. 2022 See More

These example sentences are selected automatically from various online news sources to reflect current usage of the word 'nemesis.' Views expressed in the examples do not represent the opinion of Merriam-Webster or its editors. Send us feedback. 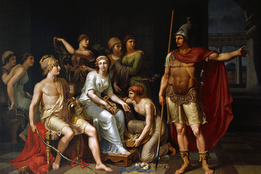 Sometimes you don't want your name to live forever

noun
nem·​e·​sis ˈnem-ə-səs
plural nemeses -ə-ˌsēz
1
a
: one that punishes or avenges
b
: a formidable and usually victorious rival or opponent
2
: an act or instance of just punishment

More from Merriam-Webster on nemesis