1 : something (such as coins or bills) used as a way to pay for goods and services and to pay people for their work Dinner cost a lot of money last night. = We were charged a lot of money for dinner last night. a sum of money See More ExamplesThat painting must be worth a lot of money. She's been making a lot of money in her new job. = (informal) She's been making big/good money in her new job. He earned some money last summer as a musician. We're trying to save enough money for a new car. The town is raising money for the elementary school. Friends would always ask her for money. It's an interesting idea, but there's no money in it: it'll never sell. The club made money [=earned money; made a profit] by selling advertisements in the newsletter. She knew she could make money [=earn a profit] on the deal. = She knew there was money to be made from/on the deal. When they take a vacation, money is no object. [=they are not concerned about the price of things] They always stay at the most expensive places.Hide
2 : a person's wealth : the money that a person has He made his money in the insurance business. He lost his money on foolish investments. = He threw all his money away on foolish investments. See More ExamplesThey decided to put all their money in the stock market. We didn't have much money when I was growing up. She comes from money. [=her family is rich] She married into money. [=she married a wealthy man]Hide
3 formal : amounts of money Most of the project is being paid for by federal monies. All monies received will be deposited in a special account.

1 : something generally accepted as a medium of exchange, a measure of value, or a means of payment: such as
a : officially coined or stamped metal currency newly minted money
b : money of account
c : paper money handed the bank teller a wad of money
2a : wealth reckoned in terms of money made her money in the insurance business
b : an amount of money raised the money for a new library
c moneys or monies plural : sums of money : funds the collection of tax monies
3 : a form or denomination of coin or paper money wanted his money in $10 bills
4a : the first, second, and third place winners (as in a horse or dog race) —usually used in the phrases in the money or out of the money
b : prize money his horse took third money
5a : persons or interests possessing or controlling great wealth politicians at the beck and call of money
b : a position of wealth born into money
for one's money
: according to one's preference or opinion For my money, this is her best novel yet.
on the money
: exactly right or accurate His prediction that it would rain was right on the money. 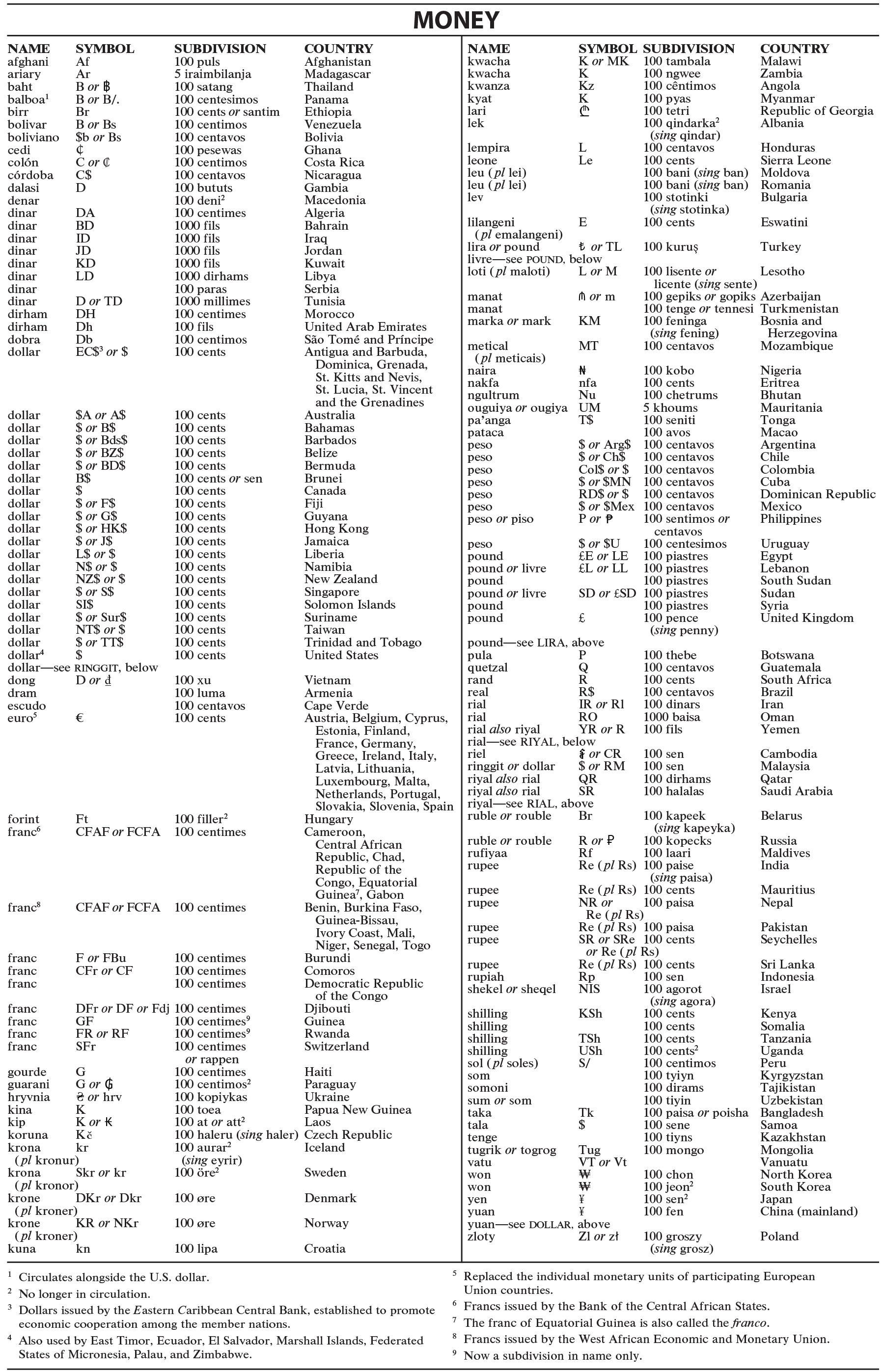 Definition of money (Entry 2 of 2)

What is the plural of money?

In its most common uses, money has no plural. We say "some money," not "a money" or "many moneys/monies." But when money refers to discrete sums of money obtained from a particular source or allocated to a particular cause, the word can be pluralized as moneys or monies, with monies being the more common spelling.

When we want to know an amount of money, we say "how much money," not "how many money."

What does 'money is no object' mean?

If money is no object, the price or cost of something does not matter.

Examples of money in a Sentence

Noun That painting must be worth a lot of money. He earned some money last summer as a musician. We're trying to save enough money for a new car. The town is raising money for the elementary school. Friends would always ask her for money. It's an interesting idea, but there's no money in it: it'll never sell. He made his money in the insurance business. They decided to put all their money in the stock market. We didn't have much money when I was growing up. Most of the project is being paid for by federal monies.
See More
Recent Examples on the Web: Noun While Democrats are still wrangling over exactly how much money to spend and what to spend it on, an even trickier task lies ahead: Figuring out how to pay for what would be one of the most expensive bills ever enacted by Congress. — BostonGlobe.com, 12 Sep. 2021 Critics have long complained that most MLM participants don’t make much money. — Jonathan Berr, Forbes, 11 Sep. 2021 Those numerical scores determine how much money an organization is eligible to receive. — Matthew J. Palm, orlandosentinel.com, 10 Sep. 2021 The auditor’s office suggested that the District keeps too much money on each bet rather than paying out better odds to winners, a complaint shared by many gamblers who have tried the GambetDC app. — Washington Post, 9 Sep. 2021 How much money was paid in ransomware attacks in the U.S. in 2020? — Chris Kornelis, WSJ, 8 Sep. 2021 Next comes deciding how much money to wager and factor in the odds. — José M. Romero, The Arizona Republic, 7 Sep. 2021 The city objected, claiming the 49ers wanted the city to pay too much money. — San Francisco Chronicle, 5 Sep. 2021 Your mistake was in allowing this problem to fester before leveling with your husband, who by now has wasted heaven-only-knows how much money on jewelry that isn’t to your liking. — Abigail Van Buren, oregonlive, 5 Sep. 2021 Recent Examples on the Web: Adjective The Dutch central bank on Monday said the platform, which processed spot trades worth $455 million in July, was not in compliance with its anti-money laundering and anti-terrorist financing laws. — Washington Post, 20 Aug. 2021 At the same time, regulators across the world are working on innovative legislation solutions to make the financial world more secure and provide legislation for anti-money laundering in terms of blockchain assets. — Dmitry Dolgorukov, Forbes, 8 June 2021 Separately, Crown said Austrac has initiated formal investigations into potential breaches of anti-money laundering laws by Crown Perth. — Jonathan Burgos, Forbes, 7 June 2021 FinCEN is the primary regulator in the United States for anti-money laundering. — CBS News, 7 July 2021 That $54 million Series C round gave Doximity a $355.3 million post-money valuation, according to PitchBook. — Katie Jennings, Forbes, 29 June 2021 Regulating cryptocurrency is another step experts recommend, especially by enforcing requirements that exchange houses that facilitate cryptocurrency transactions abide by anti-money laundering laws. — Author: Ellen Nakashima, Rachel Lerman, Anchorage Daily News, 16 May 2021 In January, Congress extended federal anti-money laundering regulations, designed to govern the banking industry, to antiquities dealers. — New York Times, 19 June 2021 In the United States, anti-money laundering and identity verification laws require such services to know who their customers are, creating a link between identity and account. — New York Times, 9 June 2021

These example sentences are selected automatically from various online news sources to reflect current usage of the word 'money.' Views expressed in the examples do not represent the opinion of Merriam-Webster or its editors. Send us feedback.

First Known Use of money

circa 1934, in the meaning defined above

History and Etymology for money

The first known use of money was in the 14th century 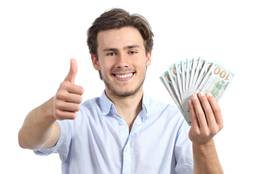 What is the Plural of 'Money?'

What is the Plural of 'Money?' 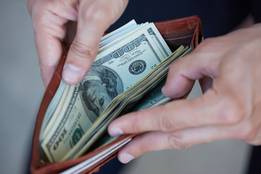 a fool and his money are soon parted

a license to print money

1 : something (such as coins or bills) used to buy goods and services and to pay people for their work
2 : a person's wealth

1 : an accepted or authorized medium of exchange especially : coinage or negotiable paper issued as legal tender by a government
2a : assets or compensation in the form of or readily convertible into cash
b : capital dealt in as a commodity to be lent, traded, or invested mortgage money available from a lender the money supply
c plural : sums of money collect tax moneys

More from Merriam-Webster on money