ˈlōn
Synonyms of loan
1
a
: money lent at interest
took out a loan to pay for the new car
b
: something lent usually for the borrower's temporary use
2
a
: the grant of temporary use
Can I have the loan of your car?
b
: the temporary duty of a person transferred to another job for a limited time
He had been on loan to the navy during the war.
3
: loanword
The word "nosh" is a loan from Yiddish.

The verb loan is one of the words English settlers brought to America and continued to use after it had died out in Britain. Its use was soon noticed by British visitors and somewhat later by the New England literati, who considered it a bit provincial. It was flatly declared wrong in 1870 by a popular commentator, who based his objection on etymology. A later scholar showed that the commentator was ignorant of Old English and thus unsound in his objection, but by then it was too late, as the condemnation had been picked up by many other commentators. Although a surprising number of critics still voice objections, loan is entirely standard as a verb. You should note that it is used only literally; lend is the verb used for figurative expressions, such as "lending a hand" or "lending enchantment."

Noun He got a car loan. He'll need several more years to pay off the rest of the loan. She needed money, so she asked her friend for a loan. Verb The National Gallery has been kind enough to loan this painting to our museum. His mother loaned him the money to buy a new car. Can you loan me $20? See More
Recent Examples on the Web
Noun
The Biden administation has maintained with confidence that the HEROES Act authorizes sweeping student loan forgiveness. —Adam S. Minsky, Forbes, 6 Feb. 2023 Separately, 43 Republican senators signed their own brief in support of the challenge to the loan forgiveness program. —Arthur Jones Ii, ABC News, 5 Feb. 2023 The proposal also makes some changes to loan forgiveness, shortening the time for people with student debt to get relief. —Aimee Picchi, CBS News, 12 Jan. 2023 Providing loan forgiveness sooner for students who borrowed less. —Los Angeles Times, 10 Jan. 2023 Cartwright, for instance, has asked whether compensation in the form of lifelong health insurance or student loan forgiveness might make people weigh the drawbacks of surgery more carefully. —WIRED, 5 Jan. 2023 Beshear expects the legislation to include 5% raises for Kentucky teachers, funding for universal preschool and student loan forgiveness for educators. —Joe Sonka, The Courier-Journal, 4 Jan. 2023 In the class of 2019, over 60% of students had student loan debt owing an average of $28,950. —Robert Cole, Forbes, 23 Jan. 2023 Klain also helped oversee the distribution of vaccines that have curbed if not ended the COVID pandemic and the enactment of a plan to forgive hundreds of billions of dollars of student loan debt for millions of Americans. —Katie Rogers, BostonGlobe.com, 21 Jan. 2023
Verb
Multiple investigations have now been launched into various unanswered questions, such as where Santos, a Donald Trump superfan who listed no assets to speak of in 2020, got hundreds of thousands of dollars to loan his campaign two years later. —Susan B. Glasser, The New Yorker, 19 Jan. 2023 Genesis, a part of Digital Currency Group, entered into a deal with Gemini in December 2020 to offer Gemini customers the chance to loan their crypto assets to Genesis in exchange for earning interest, the SEC said. —Reuters, CNN, 12 Jan. 2023 Santos may have used his newfound wealth to loan additional money to his congressional campaign. —Erin Mansfield, USA TODAY, 10 Jan. 2023 Vance loaned his campaign $1.4 million, while Ryan did not loan his campaign any money. —Andrew J. Tobias, cleveland, 5 Jan. 2023 Young almost entirely self-funded his congressional campaign — using $202,000 from his retirement savings to loan his campaign — and reported loaning another $2,000 to his gubernatorial campaign before the end of the year. —Joe Sonka, The Courier-Journal, 4 Jan. 2023 There is growing momentum behind a set of ideas that would fundamentally overhaul the two powerful financial institutions, which frequently loan or grant money from rich, industrialized nations to developing countries. —Max Bearak, New York Times, 9 Nov. 2022 Plus, the hotel is happy to loan you coolers, towels, and beach chairs for your excursions. —Elizabeth Brownfield, Forbes, 30 Dec. 2022 During this time of travail, my father-in-law offered to loan us his Saturn Sky Red Line, which has two seats and trunk space for one set of golf clubs, assuming the course features windmills and fiberglass volcanoes. —Ezra Dyer, Car and Driver, 3 Dec. 2022 See More

These example sentences are selected automatically from various online news sources to reflect current usage of the word 'loan.' Views expressed in the examples do not represent the opinion of Merriam-Webster or its editors. Send us feedback.

Note: Germanic *laihna- appears directly comparable with the Indo-Iranian s-stem represented by Vedic Sanskrit rékṇaḥ "inheritance, property," Avestan raēxənah- "inheritance," though it is uncertain if the Germanic word can also be derived from an s-stem. See note at delinquent entry 2.

circa 1543, in the meaning defined above 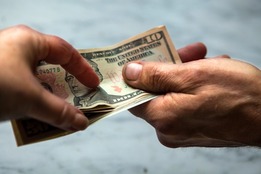 'Loan' has been a verb in English for 700 years. So why are people still complaining about it?

1 of 2 noun
ˈlōn
1
a
: money lent at interest
b
: something lent for a limited time
2
: permission to use something for a time

noun
1
a
: money lent at interest
b
: something lent usually for the borrower's temporary use
2
: a transfer or delivery of money from one party to another with the express or implied agreement that the sum will be repaid regardless of contingency and usually with interest
broadly : the furnishing of something to another party for temporary use with the agreement that it or its equivalent will be returned
the leasing of the car was termed a loan
— bridge loan
: a short-term loan used as a means of financing a purchase or enterprise prior to obtaining other funds used a bridge loan to purchase a new home prior to the sale of the old one
— conventional loan
: a loan for the purchase of real property that is secured by a first mortgage on the property rather than by any federal agency
— demand loan
: a loan that is subject to repayment upon demand of the lender
— home equity loan
: a loan or line of credit secured by the equity in one's home

More from Merriam-Webster on loan