1a : expenditure of physical or mental effort especially when difficult or compulsory was sentenced to six months at hard labor
b(1) : the services performed by workers for wages as distinguished from those rendered by entrepreneurs for profits
(2) : human activity that provides the goods or services in an economy Industry needs labor for production.
c : the physical activities (such as dilation of the cervix and contraction of the uterus) involved in giving birth also : the period of such labor
2a : an economic group comprising those who do manual labor or work for wages wants the vote of labor in the elections
b : the organizations or officials representing groups of workers negotiations between labor and management
c(1) : workers employed in an establishment
(2) : workers available for employment Immigrants provided a source of cheap labor.
3 usually Labour : the Labour party of the United Kingdom or of another part of the Commonwealth of Nations
4 : an act or process requiring labor : task The three-month project evolved into a year-long labor.
5 : a product of labor The flood destroyed the labor of years.

Definition of labor (Entry 2 of 3)

1 : to exert one's powers of body or mind especially with painful or strenuous effort : work
2 : to move with great effort the truck labored up the hill
3 : to suffer from some disadvantage or distress labor under a delusion
4 : to be in the labor of giving birth
5 of a ship : to pitch or roll heavily

1 : to treat or work out in often laborious detail labor the obvious
2 : distress, burden
3 : to cause to labor
4 archaic
a : to spend labor on or produce by labor
b : to strive to effect or achieve

Definition of labor (Entry 3 of 3)

1 : of or relating to labor
2 capitalized : of, relating to, or constituting a political party held to represent the interests of workers or made up largely of organized labor groups
Synonyms Choose the Right Synonym More Example Sentences Phrases Containing labor Learn More About labor

Choose the Right Synonym for labor

work, labor, travail, toil, drudgery, grind mean activity involving effort or exertion. work may imply activity of body, of mind, of a machine, or of a natural force. too tired to do any work labor applies to physical or intellectual work involving great and often strenuous exertion. farmers demanding fair compensation for their labor travail is bookish for labor involving pain or suffering. years of travail were lost when the house burned toil implies prolonged and fatiguing labor. his lot would be years of back-breaking toil drudgery suggests dull and irksome labor. an editorial job with a good deal of drudgery grind implies labor exhausting to mind or body. the grind of the assembly line

Examples of labor in a Sentence

Noun A day's labor should get the job done. Getting the job done will require many hours of difficult labor. He rested from his labors. The cost of repairing the car includes parts and labor. an area in which there is a shortage of cheap labor The proposed new law is opposed by organized labor. She went into labor this morning. She has been in labor for several hours. She began to have labor pains this morning. She had a difficult labor. Verb Workers labored in the vineyard. He labored for several years as a miner. She has labored in vain to convince them to accept her proposal. We should honor those who labored so long to make the truth known. The truck labored up the hill. I have been laboring through this book for months. She has a tendency to labor the obvious. See More
Recent Examples on the Web: Noun The process of using wild hops is quite labor-intensive. — Stefene Russell, The Salt Lake Tribune, 16 June 2022 For his core group of collaborators, no project is too brazen, or too labor-intensive. — New York Times, 16 June 2022 Especially since many specialty beers are labor-intensive to produce. — Globe Staff, BostonGlobe.com, 10 June 2022 And there are still labor-intensive sectors ripe for software disruption as companies move toward automation to cut costs and expand margins. — Omari Rigg, Forbes, 9 June 2022 Gone is the legendary, labor-intensive bing bread, but in its stead are seasonal Korean pancakes, a quieter dining room and two chefs ready and raring to go. — Kayla Samoy, Chicago Tribune, 8 June 2022 Another popular dish on the menu — the biscuit and kare gravy — always left behind a labor-intensive biscuit trim, leading the chefs to collaborate with their team of cooks and brainstorm unique ways to repurpose it. — Jenny Liao, Bon Appétit, 8 June 2022 No such threshold margin exists under Kentucky law for a candidate to request a recount — a more labor-intensive process that requires a judge to physically conduct a recount of ballot totals, at the petitioners' expense. — Joe Sonka, The Courier-Journal, 3 June 2022 Before the rise of the container, moving cargo over water was an expensive, labor-intensive business. — Kathryn Schulz, The New Yorker, 30 May 2022 Recent Examples on the Web: Verb Stevens exhibits a mindfulness that modern people still labor to attain. — Robert Isenberg, Longreads, 26 Apr. 2022 But few people are blessed with a universal conscience, and most of us must labor to expand the power of empathy in radiating circles, from family to community to country to planet. — Washington Post, 8 Apr. 2022 More than half of all Mexican workers still labor in the informal sector. — Washington Post, 9 Apr. 2022 In Africa, where youth unemployment is also high and the numbers are growing fastest, college graduates who compose barely 7 percent of the total workforce also labor in low-end jobs. — Joel Kotkin, National Review, 29 Mar. 2022 No need to labor over fictional narratives about brazen frauds when reality has given us Elizabeth Holmes and Bernie Madoff. — Los Angeles Times, 11 Feb. 2022 Still, fans did not labor on that point as there was too much to delve into, including the return of Grogu, Luke Skywalker (Mark Hamill), Ahsoka Tano (Rosario Dawson), Din Djarin (Pedro Pascal) and Cobb Vanth (Timothy Olyphant). — Ryan Parker, The Hollywood Reporter, 2 Feb. 2022 But few people are familiar with the medical laboratory professionals who labor behind the scenes, conducting complex medical laboratory testing to keep the engine of the medical system running. — Rodney E. Rohde, The Conversation, 19 Jan. 2022 Not only could labor shortages exacerbate the supply chain disruption, but the need to attract workers with higher wages is also inflationary. — Phillip Braun, Forbes, 29 Oct. 2021 Recent Examples on the Web: Adjective The New York State AFL-CIO had opposed an earlier version, but agreed to stay neutral based on pro-labor edits made to the version of the BPRA which would have gone up for a vote. — Kate Aronoff, The New Republic, 8 June 2022 The councilman noted that his heavily union district, which includes San Pedro, would not warm to a candidate who was not pro-labor. — Los Angeles Times, 22 Feb. 2022 Weil’s withdrawal followed a punishing campaign by business interests to paint his pro-labor views as radical. — Michael Hiltzik, Los Angeles Times, 19 May 2022 The start of President Joe Biden’s second year in office comes with new opportunities to deliver on his commitment to be pro-labor. — NBC News, 20 Jan. 2022 Many pro-labor politicians and top executives of large outside unions had been reluctant to embrace the ALU before its surprising victory. — Washington Post, 2 May 2022 Jorts, the fluffy, pro-labor orange tabby, has graced picket signs after recently achieving Internet fame. — Allison Prang, WSJ, 26 Apr. 2022 Over the last few weeks, a Democratic senator from Arizona blocked President Joe Biden’s nominee for a top job in the Labor Department, dealing a blow to the White House’s pro-labor agenda. — Eric Cortellessa, Time, 13 Apr. 2022 Biden has appointed leadership to the NLRB widely seen as pro-labor. — Washington Post, 6 Apr. 2022 See More

These example sentences are selected automatically from various online news sources to reflect current usage of the word 'labor.' Views expressed in the examples do not represent the opinion of Merriam-Webster or its editors. Send us feedback.

First Known Use of labor

14th century, in the meaning defined at intransitive sense 1

History and Etymology for labor

The first known use of labor was in the 14th century 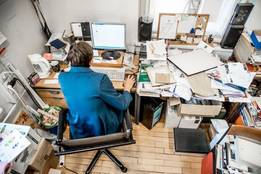 7 Words from the Working World

7 Words from the Working World

We promise it won't be a chore to read them.

1 : usually hard physical or mental effort
2 : something that has to be done : task Now a procession of ants appeared … and went about their labors …— Mark Twain, The Adventures of Tom Sawyer
3 : work for which someone is paid The bill included parts and labor.
4 : workers considered as a group There's a shortage of skilled labor.
5 : the process by which or time during which a woman gives birth

Kids Definition of labor (Entry 2 of 2)

1 : to work hard : toil Workers labored in the field.
2 : to move slowly and with great effort The truck labored up the hill.

Choose the Right Synonym for labor

labor and work mean action involving effort or exertion. work can apply to either mental or physical effort and may involve something that is enjoyable but tiring. Decorating the gym was hard work. labor suggests great or unpleasant usually physical exertion. She dreaded the dull labor of cleaning.

Medical Definition of labor (Entry 2 of 2)

: to be in the labor of giving birth

More from Merriam-Webster on labor