1 : to come or go down quickly from a high place or position An apple fell from the tree. A vase fell off the shelf. See More ExamplesRain fell from the sky. the sound of the falling rainHide
2 : to come or go down suddenly from a standing position She slipped and fell on the ice. He fell flat on his face. See More ExamplesShe was afraid that I would trip and fall. He fell down the stairs. One of the sailors had fallen overboard. a fallen treeHide
3 : to let yourself come or go down to a lower position He fell [=dropped, sank] to his knees and asked for forgiveness. He fell back/forward onto the bed.

1a : to descend freely by the force of gravity An apple fell from the tree.
b : to hang freely her hair falls over her shoulders
c : to drop oneself to a lower position fell to his knees
d : to come or go as if by falling darkness falls early in the winter
2 : to become born —usually used of lambs
3a : to become lower in degree or level the temperature fell 10°
b : to drop in pitch or volume their voices fell to a whisper
c : issue sense 1a wisdom that fell from his lips
d : to become lowered her eyes fell
4a : to leave an erect position suddenly and involuntarily slipped and fell on the ice
b : to enter as if unawares : stumble, stray fell into error We fell into a trap.
c : to drop down wounded or dead especially : to die in battle Many men fell on the battlefield.
d : to suffer military capture after a long siege the city fell
e : to lose office the party fell from power
f : to suffer ruin, defeat, or failure the deal fell through
5 : to commit an immoral act but man willfully misused his God-given freedom and fell into sin— John Hick especially : to lose one's chastity
6a : to move or extend in a downward direction the land falls away to the east
b : subside, abate the wind is falling
c : to decline in quality, activity, or quantity production fell off
d : to lose weight —used with off or away The cattle have fallen off badly in the drought.
e : to assume a look of shame, disappointment, or dejection his face fell
f : to decline in financial value or price stocks fell sharply
7a : to occur at a certain time her birthday falls on a Monday this year
b : to come by chance a job that fell into his hands
c : to come or pass by lot, assignment, or inheritance : devolve it fell to him to break the news
d : to have a certain or proper position, place, or station the accent falls on the second syllable
8 : to come within the limits, scope, or jurisdiction of something this word falls into the class of verbs
9 : to pass suddenly and passively into a state of body or mind or a new state or condition fall asleep fall in love
10 : to set about heartily or actively fell to work
11 : strike, impinge music falling on the ear

: fell sense 1
fall all over oneself or fall over oneself or fall over backward
: to display great or excessive eagerness Fans were falling all over themselves trying to get the basketball star's autograph.
fall apart
1 : disintegrate The pie was falling apart as I served it.
2 : to succumb to mental or emotional stress : break down She began to fall apart when her son was imprisoned.
fall behind
1 : to lag behind The slower hikers fell behind the group.
2 : to be in arrears He fell behind in his car payments.
fall between two stools
: to fail because of inability to choose between or reconcile two alternative or conflicting courses of action
fall flat
: to produce no response or result the joke fell flat
fall for
1 : to fall in love with He fell for her the moment he saw her.
2 : to become a victim of fell for the trick
fall from grace
: to lose acceptance or good reputation The governor fell from grace when he was accused of tax fraud.
fall home
: to curve inward —used of the timbers or upper parts of a ship's side
fall into line
: to comply with a certain course of action The company fell into line with the new regulations.
fall on or fall upon
: to meet with fell on hard times
fall on one's face
: to fail utterly the movie fell on its face at the box office
fall on one's sword
: to sacrifice one's pride or position The coach fell on his sword apologizing for the team's poor season.
fall short
1 : to be deficient The expedition's supplies began to fall short.
2 : to fail to attain something (such as a goal or target) The results fell short of expectations.

1 : the act of falling by the force of gravity
2a : a falling out, off, or away : dropping the fall of leaves a fall of snow
b : the season when leaves fall from trees : autumn
c : a thing or quantity that falls or has fallen a fall of rock at the base of the cliff especially : one or more meteorites or their fragments that have fallen together
d(1) : birth
(2) : the quantity born —usually used of lambs
3a : a costume decoration of lace or thin fabric arranged to hang loosely and gracefully
b : a very wide turned-down collar worn in the 17th century
c : the part of a turnover collar from the crease to the outer edge
d : a wide front flap on trousers (such as those worn by sailors)
e : the freely hanging lower edge of the skirt of a coat
f : one of the three outer and often drooping segments of the flower of an iris — compare standard sense 8b
g : long hair overhanging the face of dogs of some breeds
h : a usually long straight portion of hair that is attached to a person's own hair
4 : a hoisting-tackle rope or chain especially : the part of it to which the power is applied
5a : loss of greatness : collapse the fall of the Roman Empire
b : the surrender or capture of a besieged place the fall of Troy
c : lapse or departure from innocence or goodness
d : loss of a woman's chastity
e : the blame for a failure or misdeed took the fall for the robbery
6a : the downward slope (as of a hill) : declivity
b : a precipitous descent of water : waterfall —usually used in plural but singular or plural in construction
c : a musical cadence
d : a falling-pitch intonation in speech
7 : a decrease in size, quantity, degree, or value
8a : the distance which something falls
b : inclination, pitch
9a : the act of felling something
b : the quantity of trees cut down
c(1) : an act of forcing a wrestler's shoulders to the mat for a specified time (such as one second)
(2) : a bout of wrestling
10 Scotland : destiny, lot

: of, relating to, or suitable for autumn a new fall coat
Synonyms & Antonyms More Example Sentences Learn More About fall

Examples of fall in a Sentence

These example sentences are selected automatically from various online news sources to reflect current usage of the word 'fall.' Views expressed in the examples do not represent the opinion of Merriam-Webster or its editors. Send us feedback.

First Known Use of fall

1677, in the meaning defined above

History and Etymology for fall

The first known use of fall was before the 12th century 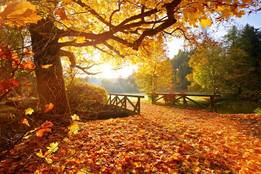 Useful and Obscure Words for Autumn

Useful and Obscure Words for Autumn

Settle in and get cozy with them

Do the Names of the Seasons Get...

Do the Names of the Seasons Get Capitalized?

On common nouns and falling leaves

be riding for a fall

1 : to come or go down freely by the force of gravity An apple fell from the tree.
2 : to come as if by falling Night fell before we got home.
3 : to become lower (as in degree or value) The temperature fell ten degrees.
4 : to topple from an upright position The tree fell.
5 : to collapse wounded or dead Too many soldiers have fallen in battle.
6 : to become captured The city fell to the enemy.
7 : to occur at a certain time This year my birthday falls on a Monday.
8 : to pass from one condition of body or mind to another fall asleep fall ill
fall back
: retreat entry 2 sense 1 "… the Witch and her crew will … fall back to her house and prepare for a siege."— C. S. Lewis, The Lion, The Witch and The Wardrobe
fall short
: to fail to be as good or successful as expected The sequel to my favorite movie fell short.

Kids Definition of fall (Entry 2 of 2)

1 : the act or an instance of going or coming down by the force of gravity a fall from a horse
2 : autumn
3 : a thing or quantity that falls a heavy fall of snow
4 : a loss of greatness : downfall the fall of an empire
5 : waterfall —usually used in pl. Niagara Falls
6 : a decrease in size, amount, or value a fall in prices
7 : the distance something falls a fall of three feet

More from Merriam-Webster on fall