ex·​er·​cise ˈek-sər-ˌsīz
Synonyms of exercise
1
a
: the act of bringing into play or realizing in action : use
the exercise of self-control
b
: the discharge of an official function or professional occupation
exercise of his judicial duties
c
: the act or an instance of carrying out the terms of an agreement (such as an option) —often used attributively
an option's exercise price
2
a
: regular or repeated use of a faculty or bodily organ
b
: bodily exertion for the sake of developing and maintaining physical fitness
trying to get more exercise
3
: something performed or practiced in order to develop, improve, or display a specific capability or skill
arithmetic exercises
vocal exercises
4
: a performance or activity having a strongly marked secondary or ulterior aspect
party politics has always been an exercise in compromise—H. S. Ashmore
5
a
: a maneuver, operation, or drill carried out for training and discipline
naval exercises
b
exercises plural : a program including speeches, announcements of awards and honors, and various traditional practices of secular or religious character
commencement exercises

1
a
: to make effective in action : use
didn't exercise good judgment
b
: to bring to bear : exert
exercise influence
c
: to implement the terms of
exercise an option
2
a
: to use repeatedly in order to strengthen or develop
exercise a muscle
b
: to train by drills and maneuvers
exercise troops
c
: to put through exercises
exercise the horses
3
a
: to engage the attention and effort of
b
: to cause anxiety, alarm, or indignation in
the issues exercising voters this year

Noun Get plenty of fresh air and exercise. Swimming is my favorite kind of exercise. She did stretching exercises before her daily run. Do the writing exercise at the end of each chapter. The negotiations have gotten nowhere, and I see no reason to continue with this pointless exercise. Verb It's important to exercise every day. He eats right and exercises regularly. Bicycle riding exercises the leg muscles. The stable boys exercise the horses every morning. He didn't exercise good judgment. We just need to exercise common sense. She has been reluctant to exercise her authority. Exercise caution when using these chemicals. See More
Recent Examples on the Web
Noun
The symphony can come off as an exercise in motivic obsession on the level of Beethoven’s Fifth, and even has that work’s style of a soaringly ecstatic finale. —Joshua Barone, New York Times, 22 Jan. 2023 Though some might beg to differ with that assessment, as written the movie starts to feel like an exercise in proving Atwood right. —Peter Debruge, Variety, 21 Jan. 2023 Lunar New Year feasts have always been an exercise in abundance in my family. —Gwendolyn Wu, Chron, 18 Jan. 2023 Hitting the pause button for a season could have been a better approach, but to the extent that this outing was an exercise in purifying Gucci's lexicon, the collection opened a door to the future. —Angelo Flaccavento, CNN, 17 Jan. 2023 Inside, the 296 is an exercise in elegant minimalism, except for the steering wheel. —Eric Stafford, Car and Driver, 14 Jan. 2023 Holed up at Long Pond Studio in New York’s Hudson Valley with close collaborator Aaron Dessner of the National, the singer and songwriter looked at creating the record as being an exercise in growing up. —Larisha Paul, Rolling Stone, 13 Jan. 2023 With the world around them collapsing, preparing for the worst is an understandable exercise in control. —Lovia Gyarkye, Washington Post, 12 Jan. 2023 But when the grifters in question are played by Robert Redford and Paul Newman, a labyrinthine swindle becomes an exercise in industrial-strength charm. —Jesse Hassenger, Men's Health, 12 Jan. 2023
Verb
In what was an indication of ambivalence in his skill set at the time, the Giants in April declined to exercise Jones’ fifth-year option for 2023. —Lorenzo Reyes, USA TODAY, 23 Jan. 2023 The buyer decides to exercise his option and buy your shares for $30. —Jim Probasco, Fortune, 29 Dec. 2022 Paxton will now have until Thursday to decide whether to exercise a one-year, $4 million player option or decline it and become a free agent. —Alex Speier, BostonGlobe.com, 7 Nov. 2022 The Orlando Magic didn’t exercise R.J. Hampton’s fourth-year team option for the 2023-24 season, multiple sources told the Orlando Sentinel Friday evening. —Khobi Price, Orlando Sentinel, 28 Oct. 2022 First baseman Anthony Rizzo can opt out and give up a $16 million salary for next season, and the Yankees are likely to exercise a $15 million option on pitcher Luis Severino rather than pay a $2.75 million buyout. —Dallas News, 23 Oct. 2022 Before the 2022 NFL Draft, New York declined to exercise their fifth-year option on Jones, which is quite the nudge into free agency after this season. —Michael Arinze, Chicago Tribune, 26 Sep. 2022 The Falcons declined to exercise their fifth-year option, however, after McKinley generated 16½ sacks in his first three seasons. —Gary Klein, Los Angeles Times, 22 Sep. 2022 Digital World said in a filing this week that its sponsor, Arc Global Investments II, plans to exercise an option to unilaterally extend the merger deadline by three months. —Matt Egan, CNN, 8 Sep. 2022 See More

These example sentences are selected automatically from various online news sources to reflect current usage of the word 'exercise.' Views expressed in the examples do not represent the opinion of Merriam-Webster or its editors. Send us feedback.

Middle English, from Anglo-French exercice, from Latin exercitium, from exercitare to train, exercise, frequentative of exercēre to train, occupy, from ex- + arcēre to enclose, hold off — more at ark 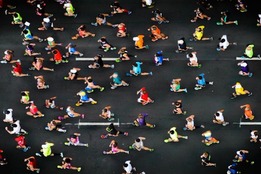 10 Words For Getting In Shape

Before you hit the gym, hit the books

1 of 2 noun
ex·​er·​cise ˈek-sər-ˌsīz
1
: the act of putting into use, action, or practice
the exercise of power
2
: bodily activity for the sake of physical fitness
get plenty of fresh air and exercise
3
: something done to develop skill
arithmetic exercises
finger exercises
4
plural : a program of songs, speeches, and announcements of awards and honors
graduation exercises

2 of 2 verb
exercised; exercising
1
: to put into use : exert
exercise patience
exercise authority
2
a
: to use again and again in order to strengthen or develop
exercise a muscle
b
: to put through exercises : give exercise to
exercise the dog
3
: to worry, alarm, or annoy about something
the people were exercised about pollution
4
: to take exercise
exercises every day
exercisable
-ˌsī-zə-bəl
adjective
exerciser noun

1 of 2 noun
ex·​er·​cise ˈek-sər-ˌsīz
1
: regular or repeated use of a faculty or bodily organ
2
: bodily exertion for the sake of developing and maintaining physical fitness

1
: to use repeatedly in order to strengthen or develop (as a muscle)
2
: to put through exercises

1 of 2 noun
ex·​er·​cise ˈek-sər-ˌsīz
1
: the discharge of an official function or professional occupation
2
: the act or an instance of carrying out the terms of an agreement (as an option)

2 of 2 transitive verb
exercised; exercising
1
: to make effective in action
exercising power
2
: to bring to bear
exercise influence
3
: to implement the terms of (as an option)
exercisable
ˌek-sər-ˈsī-zə-bəl, ˈek-sər-ˌsī-
adjective

More from Merriam-Webster on exercise