en·​nui ˌän-ˈwē
Synonyms of ennui
: a feeling of weariness and dissatisfaction : boredom

The French loanword ennui comes from the very same Late Latin word that gave us annoy — inodiare ("to make loathsome"). We borrowed ennui several centuries after absorbing annoy into the language. Ennui deals more with boredom than irritation - and a somewhat specific sort of boredom at that. It generally refers to the feeling of jadedness that can result from living a life of too much ease. The poet Charles Lloyd described it well in his 1823 Stanzas to Ennui when he referred to that world-weary sensation as a "soul-destroying fiend" which visits with its "pale unrest / The chambers of the human breast / Where too much happiness hath fixed its home."

When the antiproton was discovered … it sent a wave of ennui through the physics community. Not that its discovery was unimportant, but on the basis of Dirac's theory, everybody expected it. —Roger G. Newton, The Truth of Science, 1997 Chauncey and I were keen enough about our aesthetic solution to the ennui of war to try to proselytize others. He organized discussion groups with the crew; I took volunteers to visit landmarks … —Louis Auchincloss, "Atlantic War," in Authors at Sea, ed. Robert Shenk,  1997 The attendant outside was standing on tennis balls, exercising the soles of her feet, her body swaying back and forth with the ennui of jelly. —Edna O'Brien, New Yorker, 17 June 1991 Thus the days of life are consumed, one by one, without an object beyond the present moment; ever flying from the ennui of that, yet carrying it with us … —Thomas Jefferson, in a letter dated 7 Feb. 1787 Thomas Jefferson: Writings,  1984 the kind of ennui that comes from having too much time on one's hands and too little will to find something productive to do
Recent Examples on the Web Privilege oozes from James Foster (Alexander Skarsgard), along with a sense of ennui and despair. —David Fear, Rolling Stone, 22 Jan. 2023 Hence the giant scale of Baumbach’s vision: DeLillo’s droll satire of ’80s existential ennui has the expansiveness of a twinkly Spielbergian adventure. —David Sims, The Atlantic, 31 Dec. 2022 Then again, my own finale theory emphasized the season’s disaffection and ennui. —Matt Brennan, Los Angeles Times, 11 Dec. 2022 The only problem is that Gerwig has other things to work on (being the voice of a generation of white women’s ennui and excitement). —Jason P. Frank, Vulture, 21 Nov. 2022 Next week, traveling solo and how to overcome those inevitable bouts of loneliness and ennui. —Cnt Editors, Condé Nast Traveler, 3 Nov. 2022 The collective mood of the typical industry audience may best be described as impatient ennui. —Robin Givhan, Washington Post, 30 Aug. 2022 This movie feels like an exercise in imagination by people who have never stepped foot in such a place, who think jokes about staplers and spreadsheets capture the soul-sucking ennui of such a job. —Peter Debruge, Variety, 19 Jan. 2023 His lyrics took a brooding, introspective approach to suburban ennui, winning over the sensitive souls of the indie rock community. —Alex Traub, New York Times, 4 Jan. 2023 See More

These example sentences are selected automatically from various online news sources to reflect current usage of the word 'ennui.' Views expressed in the examples do not represent the opinion of Merriam-Webster or its editors. Send us feedback.

French, from Old French enui annoyance, from enuier to vex, from Late Latin inodiare to make loathsome — more at annoy

1732, in the meaning defined above 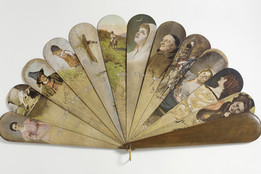 Merriam-Webster and LACMA: Words and...

When a dictionary talks to a museum

More from Merriam-Webster on ennui