doc·​tor ˈdäk-tər
Synonyms of doctor
1
a
Christianity : an eminent theologian declared a sound expounder of doctrine by the Roman Catholic Church

called also doctor of the church

b
: a learned or authoritative teacher
c
: a person who has earned one of the highest academic degrees (such as a PhD) conferred by a university
Most of the college's faculty members are doctors in their fields.
The class is being taught by Doctor Menzer.
d
: a person awarded an honorary doctorate (such as an LLD or Litt D) by a college or university
2
a
: a person skilled or specializing in healing arts
especially : one (such as a physician, dentist, or veterinarian) who holds an advanced degree and is licensed to practice
See your doctor if the condition worsens.
an eye doctor
doctors' bills
b
: medicine man
3
a
: material added (as to food) to produce a desired effect
b
: a blade (as of metal) for spreading a coating or scraping a surface
4
: a person who restores, repairs, or fine-tunes things
doctoral
ˈdäk-t(ə-)rəl
adjective
doctorless
ˈdäk-tər-ləs
adjective
doctorship
ˈdäk-tər-ˌship
noun

1
a
: to give medical treatment to
doctored her ailing husband
b
: to restore to good condition : repair
doctor an old clock
2
a
: to adapt or modify for a desired end by alteration or special treatment
doctored the play to suit the audience
The drink was doctored.
b
: to alter deceptively
accused of doctoring the election returns
The pitcher tried to cheat by doctoring the baseball.

1
: to practice medicine
a career doctoring in the country
2
dialect : to take medicine

These example sentences are selected automatically from various online news sources to reflect current usage of the word 'doctor.' Views expressed in the examples do not represent the opinion of Merriam-Webster or its editors. Send us feedback.

1712, in the meaning defined at transitive sense 1a 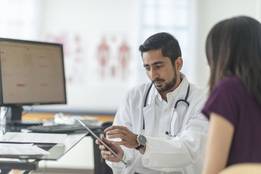 Is It 'Doctor's Appointment' or 'Doctor...

The doctor is in, but whose appointment is it?

Why Is a Medical Expert Called a...

And why is 'physicist' so different?

1 of 2 noun
doc·​tor ˈdäk-tər
1
: a person holding one of the highest degrees (as a PhD) given by a university
2
: a person (as a physician, dentist, or veterinarian) skilled and specializing in the art of healing
doctoral
-t(ə-)rəl
adjective

2 of 2 verb
doctored; doctoring -t(ə-)riŋ
1
a
: to give medical treatment to
b
: to practice medicine
c
: to bring back to good condition : repair
doctor an old clock
2
: to tamper with
doctored the election returns

1 of 2 noun
doc·​tor ˈdäk-tər
1
: a person skilled or specializing in healing arts
especially : one (as a physician, dentist, or veterinarian) who holds an advanced degree and is licensed to practice
2
a
: a person who has earned one of the highest academic degrees (as a PhD) conferred by a university
b
: a person awarded an honorary doctorate by a college or university

1
: to give medical treatment to
2
: castrate sense 1, spay
have your pet cat doctored

More from Merriam-Webster on doctor