cre·​a·​tion krē-ˈā-shən
1
: the act of creating
especially : the act of bringing the world into ordered existence
2
: the act of making, inventing, or producing: such as
a
: the act of investing with a new rank or office
b
: the first representation of a dramatic role
3
: something that is created: such as
a
: world
b
: creatures singly or in aggregate
c
: an original work of art
d
: a new usually striking article of clothing

The play continues to entertain audiences 25 years after its creation. Job creation will be an important issue in next year's elections. These changes will lead to the creation of new businesses. The company was largely the creation of one woman. Come taste our chef's delicious new creations. She's wearing one of her original fashion creations. How are humans different from the rest of creation? See More
Recent Examples on the Web In Alabama and Louisiana, that meant stopping the creation of additional majority-Black districts that would have likely favored Democrats. Melanie Masonstaff Writer, Los Angeles Times, 16 Nov. 2022 This involved the creation of distinct websites promoting items like satirical ancestry tracing services and endlessly-shooting guns. Prem Thakker, The New Republic, 16 Nov. 2022 The commission also recommended the creation of a permanent interagency committee within the executive branch to develop plans to impose sanctions and other economic penalties to meet a Chinese blockade, attack or other hostile acts against Taiwan. Yuka Hayashi, WSJ, 15 Nov. 2022 The reemergence of cold storage, however, does not necessarily imply the end of hot storage, but rather the creation of a more heterogeneous data storage ecosystem. Steven Gonzalez Monserrate, WIRED, 15 Nov. 2022 Bunny poured her nesting urge into the creation of many perfect houses for Paul and the children. Mac Griswold, Town & Country, 15 Nov. 2022 In March, Defense Secretary Lloyd Austin ordered the creation of an independent panel to review suicides in the military focusing on nine bases. Tom Vanden Brook, USA TODAY, 14 Nov. 2022 The creation of the Islamic Revolutionary Guard Corps (IRGC) as a parallel security institution to the national army was meant primarily to protect the revolutionary regime and its leaders, thus preventing the army from accumulating too much power. Adam Pourahmadi, CNN, 14 Nov. 2022 In frustration, Nixon secretly authorized the creation of a team of intelligence operatives who would do whatever, in his view, had to be done. Margaret Talbot, The New Yorker, 14 Nov. 2022 See More

These example sentences are selected automatically from various online news sources to reflect current usage of the word 'creation.' Views expressed in the examples do not represent the opinion of Merriam-Webster or its editors. Send us feedback. 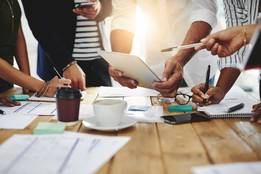 Can 'Creative' Be a Noun?

When adjectives drift into noun territory

cre·​ation
krē-ˈā-shən
1
: the act of creating
especially : the bringing of the world into existence out of nothing
2
: something created
3
: all created things : world

More from Merriam-Webster on creation