1 : a device other than a watch for indicating or measuring time commonly by means of hands moving on a dial broadly : any periodic system by which time is measured
2 : a registering device usually with a dial specifically : odometer
3 : time clock
4 : a synchronizing device (as in a computer) that produces pulses at regular intervals
5 : biological clock
against the clock
1 : with or within a time constraint working against the clock
2 : with clocked speed rather than the order of finish as the criterion for placement trial races against the clock
around the clock or less commonly round the clock
1 : continuously for 24 hours : day and night without cessation
2 : without relaxation and heedless of time
kill the clock or run out the clock
: to use up as much as possible of the playing time remaining in a game (such as football) while retaining possession of the ball or puck especially to protect a lead

— see also a race against the clock

Definition of clock (Entry 2 of 3)

1a : to time with a stopwatch or by an electric timing device
b : to be timed at
2 : to register on a mechanical recording device wind velocities were clocked at 80 miles per hour
3 : to hit hard
4 chiefly British : attain, realize —usually used with up just clocked up a million … paperback sales — Punch
5a : to travel (a distance) over time clocks more than 15,000 miles a year on business
b : put in sense 3 clocking long hours at the office

Definition of clock (Entry 3 of 3)

: an ornamental figure on the ankle or side of a stocking or sock
Other Words from clock Synonyms More Example Sentences Phrases Containing clock Learn More About clock

Other Words from clock

Examples of clock in a Sentence

Verb He clocked 3 hours and 15 minutes in his last marathon. His fastest pitch was clocked at 91 miles per hour. The cop said she clocked me going 95 miles per hour. I was so angry I wanted to clock him.

First Known Use of clock

1883, in the meaning defined at transitive sense 1a

1530, in the meaning defined above

History and Etymology for clock

Our Reviews team has selected the best smart watches.

The first known use of clock was in the 14th century 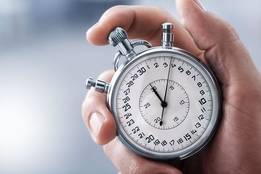 Clocking a Newer Sense of ‘Clock’

Clocking a Newer Sense of ‘Clock’

It’s not always a matter of time.

When two words come from the same source

: a device for measuring or telling the time and especially one not meant to be worn or carried by a person
around the clock
: at every hour of the day The store is open around the clock.

Kids Definition of clock (Entry 2 of 2)

1 : to measure the amount of time it takes to do something We ran while the coach clocked us.
2 : to show (as time or speed) on a recording device

More from Merriam-Webster on clock