cha·​os ˈkā-ˌäs
1
a
: a state of utter confusion
the blackout caused chaos throughout the city
b
: a confused mass or mixture
a chaos of television antennas
2
a
often capitalized : a state of things in which chance is supreme
especially : the confused unorganized state of primordial matter before the creation of distinct forms compare cosmos
b
: the inherent unpredictability in the behavior of a complex natural system (such as the atmosphere, boiling water, or the beating heart)
3
obsolete : chasm, abyss

These example sentences are selected automatically from various online news sources to reflect current usage of the word 'chaos.' Views expressed in the examples do not represent the opinion of Merriam-Webster or its editors. Send us feedback.

Latin, from Greek — more at gum 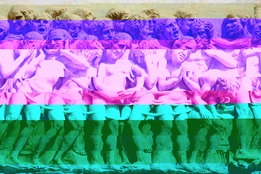 More from Merriam-Webster on chaos