cen·​ter ˈsen-tər
ˈse-nər
Synonyms of center
1
a
: the point around which a circle or sphere is described
broadly : a point that is related to a geometrical figure in such a way that for any point on the figure there is another point on the figure such that a straight line joining the two points is bisected by the original point

b
: the center of the circle inscribed in a regular (see regular entry 1 sense 3b) polygon
2
a
: a point, area, person, or thing that is most important or pivotal in relation to an indicated activity, interest, or condition
a railroad center
the center of the controversy
b
: a source from which something originates
a propaganda center
c
: a group of neurons having a common function
respiratory center
d
: a region of concentrated population
an urban center
e
: a facility providing a place for a particular activity or service
a day-care center
a shopping center
a medical center
3
a
: the middle part (as of the forehead or a stage)
b often capitalized
(1)
: a grouping of political figures holding moderate views especially between those of conservatives and liberals
(2)
: the views of such politicians
The party's new policies show a shift toward the center.
(3)
: the adherents of such views
4
a
: a player occupying a middle position on a team: such as
(1)
: the football player in the middle of a line who passes the ball between his legs to a back to start a down
(2)
: the usually tallest player on a basketball team who usually plays near the basket
b
: center field
5
a
: either of two tapered rods which support work in a lathe or grinding machine and about or with which the work revolves
b
: a conical recess in the end of work (such as a shaft) for receiving such a center
centerless
ˈsen-tər-ləs
ˈse-nər-
adjective

1
: to place or fix at or around a center or central area
center the picture on the wall
2
: to give a central focus or basis
centers her hopes on her son
the plot was centered on espionage
3
: to adjust (things, such as lenses) so that the axes coincide
4
a
: to pass (a ball or puck) from either side toward the middle of the playing area
b
: to hand or pass (a football) backward between one's legs to a back (see back entry 1 sense 3) to start a down
5
: to play center (see center entry 1 sense 4) on
center a line in hockey

: to have a specified center : focus
What prepositions are used with center?: Usage Guide

The intransitive verb center is most commonly used with the prepositions in, on, at, and around. At appears to be favored in mathematical contexts; the others are found in a broad range of contexts. Center around, a standard idiom, has often been objected to as illogical. The logic on which the objections are based is irrelevant, since center around is an idiom and idioms have their own logic. Center on is currently more common in edited prose, and revolve around and similar verbs are available if you want to avoid center around.

These example sentences are selected automatically from various online news sources to reflect current usage of the word 'center.' Views expressed in the examples do not represent the opinion of Merriam-Webster or its editors. Send us feedback.

1555, in the meaning defined at transitive sense 1 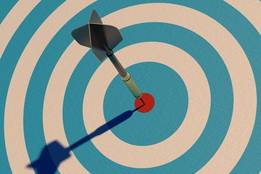 Getting to the Heart of 'Epicenter'

1 of 2 noun
cen·​ter ˈsent-ər
1
: the point inside a circle or sphere that is an equal distance from all the points on the edge
2
a
: a place in or around which an activity takes place or from which something begins
the center of the scandal
b
: a place for a particular activity or service
a day-care center
c
: a group of neurons that have a common purpose
respiratory center
3
: the middle part (as of a stage)
4
: a player occupying a middle position on a team

More from Merriam-Webster on center