ca·​dence ˈkā-dᵊn(t)s
plural cadences
Synonyms of cadence
1
a
: the beat, time, or measure of rhythmical motion or activity
The drill sergeant counted cadence.
the steady cadence of the drums
b
: a rhythmic sequence or flow of sounds in language
the grand cadence of his poetry
c
: a regular and repeated pattern of activity
In addition to our weekly cadence, we take a step back once a quarter to think about our platform a little more strategically.—David Vandegrift
To meet its cadence of a launch every other week, SpaceX must build at least two of these each month.—Eric Berger
Then in the evening, it's off to the boxing gym or a sparring session for two to three more hours. In recent years, she's kept a cadence of two to four fights annually, her last being a loss for the WBC light middleweight world title in Poland in September.—Deanna Cioppa
2
a
: a falling inflection of the voice
b
: a concluding and usually falling strain
specifically : a musical chord sequence moving to a harmonic close or point of rest and giving the sense of harmonic completion
3
: the modulated and rhythmic recurrence of a sound especially in nature
cadenced
ˈkā-dᵊn(t)st
adjective
cadential
kā-ˈden(t)-shəl
adjective

A cadence is a rhythm, or a flow of words or music, in a sequence that is regular (or steady as it were). But lest we be mistaken, cadence also lends its meaning to the sounds of Mother Nature (such as birdsong) to be sure. Cadence comes from Middle English borrowed from Medieval Latin’s own cadentia, a lovely word that means “rhythm in verse.” (You may also recognize a cadence cousin, sweet cadenza, as a word that is familiar in the opera universe.) And from there our cadence traces just a little further backward to the Latin verb cadere “to sound rhythmically, to fall.” Praise the rising and the falling of the lilting in our language, whether singing songs or rhyming or opining on it all.

Cadence in the Military

Cadence can refer to any rhythmic sequence of words or sound, but in military contexts, the word has a particular meaning, referring to the rhythmic chants sung by soldiers in marching formation.

These chants can often help keep marchers in line with the rhythm of the march:

Early each morning we were assembled for drill, marching to the cadence of a full-throated Marine sergeant who had little use for us; what he knew for sure about us was that we would be of little value in any hand-to-hand fight.
Lewis Thomas, in Authors at Sea, 1997

the steady cadence of the drums Oars moved back and forth in smooth cadence. He speaks with a soft Southern cadence.
Recent Examples on the Web Dunham has the former Dallas Cowboys wide receiver’s inflection and boisterous cadence down, reading from a list of closings, punctuating each with an Irvin-like ... closed! —Dallas News, 31 Jan. 2023 Cheaper pedal-assists have a cadence sensor, which, unlike the torque sensor on a Citi Bike, is binary and, when activated, can feel like a passive-aggressive shove. —Patricia Marx, The New Yorker, 26 Dec. 2022 But the duration of protection against contracting Covid is short-lived — which could lead to a vaccination cadence that is impractical to try to maintain. —Helen Branswell, STAT, 26 Oct. 2022 Testing, which is the primary tool of assessment, often follows a cadence similar to an organization’s compliance regime. —Rob Gurzeev, Forbes, 9 Dec. 2021 Method Man hammered home a lot of stuff on cadence and delivery, which is important for a song. —William E. Ketchum Iii, Rolling Stone, 6 Jan. 2023 In 2022 SpaceX was able to dramatically increase its launch cadence by both ramping up Starlink satellite production as well as maturing its operations to reuse Falcon 9 first stages and payload fairings. —Eric Berger, Ars Technica, 3 Jan. 2023 The falling bodies created very specific sounds and presented an interesting challenge for the sound team to find the right cadence and effect. —Karen M. Peterson, Variety, 12 Dec. 2022 The actor lends his voice to the dummy, Corky, adding perfect cadence and brilliant suspense to the terrifying trope of deadly dummies. —Robert English, EW.com, 10 Nov. 2022 See More

These example sentences are selected automatically from various online news sources to reflect current usage of the word 'cadence.' Views expressed in the examples do not represent the opinion of Merriam-Webster or its editors. Send us feedback.

Note: Since at least the first edition of the Oxford English Dictionary (1888), this word has been attributed to Italian, either directly or through French. However, attestations of French cadence and Italian cadenza are significantly later than the first occurrences of cadence in Middle English (ca. 1390) and early Scots (ca. 1420). (The word also occurs in Chaucer's House of Fame, composed ca. 1380 and attested earliest in a manuscript of ca. 1450.) In Medieval Latin cadentia appears in the approximate sense "verse rhythm" (pedum cadentia) in John of Garland's Parisiana poetria (composed ca. 1234).

14th century, in the meaning defined at sense 1b

When two words come from the same source 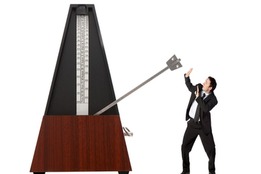 How 'Cadence' Became a Business Term

Music isn't the only thing with rhythm

noun
ca·​dence ˈkād-ᵊn(t)s
1
a
: rhythmic flow of sounds : the beat of rhythmic motion or activity
2
: a melodic or rhythmic pattern that serves as the close of a musical phrase or composition
cadenced
-ᵊn(t)st
adjective

More from Merriam-Webster on cadence