ˈbrüd
Synonyms of brood
1
: the young of an animal or a family of young
especially : the young (as of a bird or insect) hatched or cared for at one time
a hen with her brood of chicks
2
: a group having a common nature or origin
the entire brood of chronicle plays—T. S. Eliot
3
: the children of a family
takes their brood to church every Sunday

1
a
: to sit on or incubate (eggs)
b
: to produce by or as if by incubation : hatch
2
of a bird : to cover (young) with the wings
3
: to think anxiously or gloomily about : ponder
I used to brood these things on my walk—Christopher Morley

1
a
of a bird : to brood eggs or young
b
: to sit quietly and thoughtfully : meditate
2
: hover, loom
the old fort brooding above the valley
3
a
: to dwell gloomily on a subject
brooded over his mistake
b
: to be in a state of depression
sat brooding in her room

The Eggy History of Brood

One of the noun senses of brood that is often encountered today is "the children of a family" (as in "they showed up at the picnic with their whole brood"). This may seem as though it is unrelated to the most commonly used verb sense, which is "to think anxiously or gloomily about; ponder," but the two words come from the same source, the Old English brōd. The noun form of brood came first, and the verb, when it appeared in our language, was used to refer to the action of chickens sitting on their eggs. Eventually the verb began to be used in a figurative manner, and took on the "worriedly pondering" sense it has today.

Noun a hen and her brood of chicks Mrs. Smith took her brood to church every Sunday. Verb He brooded over his mistake. After the argument, she sat in her bedroom, brooding.
Recent Examples on the Web
Noun
Somehow, Lola was more of a movie star than my other friends who got to be godmothers for the rest of the brood. —Margareta Magnusson, Fortune, 28 Jan. 2023 Those additions to the MacBook brood make for, now, quite a few modern MacBook Pro options. —PCMAG, 18 Jan. 2023 Kayce Dutton Forever untethered within the Dutton family and at one point estranged from his father, Kayce (Luke Grimes) is the youngest of the Dutton brood but the first to have his own family. —Lauren Puckett-pope, ELLE, 18 Dec. 2022 When humans return to the planet of Pandora and begin to ravage its forests, human-turned-Na'vi Jake Sully (Sam Worthington) and his family find shelter with Ronal's tribe, which teaches the Sully brood how to fight and communicate underwater. —Patrick Ryan, USA TODAY, 16 Dec. 2022 Holiday rituals with the potential to last generations can develop organically—or they can be born of a big box containing a cloven-hoofed rattan figure adorned with 240 LEDs that will eventually become part of the brood. —WSJ, 18 Nov. 2022 Reynolds comment could be in reference to a bigger baby bottle for his expanding brood or, of course, to the actor's Aviation Gin. —Amanda Taylor, Peoplemag, 3 Nov. 2022 At the Gulkana Hatchery, a few people working for the Prince William Sound Aquaculture Corp. raise a brood of up to 35 million red salmon each year and release them into the Gulkana River system. —Ned Rozell, Anchorage Daily News, 30 July 2022 In temperate climates, worker bees born in spring and summer live for a few weeks, rearing brood and foraging for nectar and pollen. —Gemma Tarlach, Discover Magazine, 13 Mar. 2019
Adjective
First, coot parents allow brood reduction to happen, watching their chicks compete to the death. —Elizabeth Preston, Discover Magazine, 27 Mar. 2013 Their home became a way station for traveling students, poets and artists, as well as for Mr. Barker’s already sizable brood, many of them grown with families of their own. —New York Times, 19 May 2022 The Yankees’ ace didn’t brood that whole time, but didn’t forget about the Red Sox chasing him in the third inning of the American League Wild Card. —Kristie Ackert, Hartford Courant, 7 Apr. 2022 Biologists this week assigned the famed gray wolf OR-7 and his brood official pack status, the Associated Press reports. —The Editors, Outside Online, 9 Jan. 2015 The most limiting factor for these stockings is acquiring brood stock. —Matt Wyatt, San Antonio Express-News, 29 Apr. 2021 The department’s goal within the next few years is to create an army of brood fish from ShareLunker offspring. —Dallas News, 10 Apr. 2021 Justin Hughes, upland gamebird habitat specialist for Montana Fish Wildlife & Parks in Region 7, said turkeys enjoyed good nesting and brood conditions across the region during 2020. —Brian Lovett, Outdoor Life, 8 Jan. 2021 Though still being tabulated, this summer’s study suggests brood survival was favorable, at least in the northeast, Roy said. —Star Tribune, 17 Sep. 2020
Verb
Evans has perfected the fine art of tortured brooding, and between the stresses of the job and the toll of his inner turmoil, creator Russell Lewis gives Morse plenty to brood about. —San Diego Union-Tribune, 25 Nov. 2022 However, do not brood about it or get alarmed by it. —Jack Thomas, BostonGlobe.com, 19 Oct. 2022 If Marvel's superheroes struggle with the most effective ways to serve humanity, DC’s rival larger-than-life demigods brood over whether heroism is worth performing at all. —Jesse Hassenger, Chron, 18 Oct. 2022 Methodical Innovators do not brood, develop a victim mentality, or keep asking why. —Sri Manchala, Forbes, 26 Aug. 2022 Squids don't usually brood their eggs and generally die soon after laying them, Chau Tu reported for Science Friday in 2016. —Elizabeth Gamillo, Smithsonian Magazine, 11 July 2022 The penguins went so far as to attempt to brood a rock before a zookeeper gave them a real egg to care for, which soon hatched Tango. —Jessica Winter, The New Yorker, 11 July 2022 The male seahorses ‘get pregnant’ and brood the babies in their pouch. —Cecilia Rodriguez, Forbes, 29 Aug. 2021 Keaton’s Wayne, who manages to brood with a sense of humor, communicates with every love language in this film. —BostonGlobe.com, 4 Feb. 2021 See More

These example sentences are selected automatically from various online news sources to reflect current usage of the word 'brood.' Views expressed in the examples do not represent the opinion of Merriam-Webster or its editors. Send us feedback. 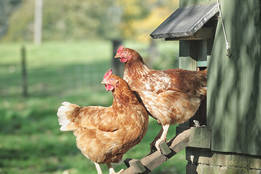 How Brooding Chickens Brought Us...

No, the chickens aren't moody

1 of 3 noun
ˈbrüd
: a family of young animals or children
especially : the young (as of a bird) hatched or cared for at one time

2 of 3 verb
1
: to sit on eggs in order to hatch them
2
: to cover young with the wings
3
: to think long and anxiously about something
brooded over his mistake
broodingly
-iŋ-lē
adverb

3 of 3 adjective
: kept for breeding
a brood mare
a brood flock

1 of 2 noun
ˈbrüd
: the young of an animal or a family of young
especially : the young (as of a bird or insect) hatched or cared for at one time

2 of 2 transitive verb
1
a
: to sit on or incubate (eggs)
b
: to produce by or as if by incubation
2
: to think anxiously or gloomily about

1
of a bird : to brood eggs or young
2
a
: to dwell gloomily on a subject
b
: to be in a state of depression

More from Merriam-Webster on brood