Paralympics was in the news a considerable amount this week, after the 16th Summer Paralympic Games began on August 24th.

The first week of the Paralympics yielded several breakthrough moments, including a first for an ostensibly mixed-gender sport, a gold medal for a country that had never claimed one, and a five-time swimming champion who switched sports and struck gold again.
— Chang W. Lee, The New York Times, 2 Sept. 2021

We define Paralympics (which are also referred to as the Paralympic Games) as “a series of international contests for athletes with disabilities that are associated with and held following the summer and winter Olympic Games.” The word came into use in the 1950s as a portmanteau, a blend of paraplegic and Olympics. However, due to the inclusion of non-paraplegic athletes, the initial portion of the word has come to be associated with the sense of the prefix para- meaning “alongside of.” 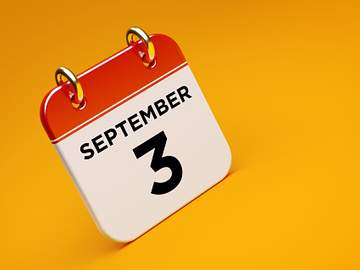 We hope you have a nice, long weekend.

A series of words spiked in lookups, bound together by their repeated appearances in coverage of, and discussions about, a recent law in Texas banning almost all forms of abortion. Dystopia and dystopian were frequently invoked.

The die was cast when Anthony Kennedy retired. It was cast when Trump released a list of justices that were going to overturn Roe v Wade. And now every, Texan is empowered to spy on people who can be pregnant to see if they violated this law, the dystopia is here.
— (Irin Carmon, transcript) MSNBC, All In with Chris Hayes, 1 Sept. 2021

We define dystopia as “an imagined world or society in which people lead wretched, dehumanized, fearful lives,” and dystopian as the adjective form of this noun. A recent addition to English, appearing around the middle of the 20th century, dystopia is formed by adding the prefix of dys- (meaning “abnormal,” “difficult,” “impaired,” or “bad”) to the end of the long-extant word utopia (“a place of ideal perfection especially in laws, government, and social conditions”).

Codify (“to reduce to a code (as laws)“) spiked in lookups after Democratic legislators announced a plan to do this for abortion rights.

Democrats are planning a new push to codify abortion rights protections into federal law after the Supreme Court allowed a Texas law banning most abortions to stand, but it's unclear how far it will take them.
— Sahil Kapur, NBC News, 2 Sept. 2021

And bounty was frequently used in reference to a provision of the law which provided financial incentives for informing on people who assisted women in getting abortions.

But S.B. 8 takes the unprecedented step of empowering private citizens to police their neighbors, placing at least a $10,000 “bounty on people who provide or aid abortions, inviting random strangers to sue them,” according to a federal lawsuit challenging the policy.
— Claire Lampen, The Cut, 1 Sept 2021

The relevant sense of bounty is loosely defined as “a reward, premium, or subsidy especially when offered or given by a government.” More specifically, this sense of the word includes meanings such as “an extra allowance to induce entry into the armed services,” “a grant to encourage an industry,” “a payment to encourage the destruction of noxious animals,” and “a payment for the capture of or assistance in the capture of an outlaw.” Today a bounty hunter is “one who tracks down and captures outlaws for whom a reward is offered.” When the term first came into use, however, in the middle of the 19th century, it tended to refer either to someone who took rewards for recruiting people into the military, or to someone who hunted predatory animals for financial compensation.

Venom and venomous were much in the news, following reports that a team of researchers in Brazil had made a discovery about snake venom that might prove useful in the battle against Covid-19.

Brazilian researchers have found that a molecule in the venom of a type of snake inhibited coronavirus reproduction in monkey cells, a possible first step toward a drug to combat the virus causing COVID-19.
— Leonardo Benassatto, Reuters, 31 Aug. 2021

We provide definitions for venomous (“producing venom in a specialized gland and capable of inflicting injury or death”) and poisonous (“producing a toxic substance that causes injury or death when absorbed or ingested”) that observe this distinction. However, we also define venomous as “poisonous” and poisonous as “venomous.” We do not do this because we hate the biologists and want to make them cry: we do this because many people use these two words interchangeably, and it is our responsibility to record this usage.

Pragmatic spiked in lookups after a U.S. general used the word to describe the Taliban.

Asked about how the Taliban handled relations with the U.S. as the withdrawal entered its final stages, McKenzie said: “I will tell you that the Taliban have been very pragmatic and very businesslike as we have approached this withdrawal.”
— Myah Ward & Alexander Ward, Politico, 30 Aug. 2021

Pragmatic, in the sense employed by Gen. McKenzie, may be defined as “relating to matters of fact or practical affairs often to the exclusion of intellectual or artistic matters: practical as opposed to idealistic.” The adjective has additional meanings, including “busy,” “officious,” “opinionated” (all of which are now considered archaic), and “relating to or being in accordance with philosophical pragmatism.”

Our antedating of the week is antichoice, defined as “antiabortion.” Our earliest known use of this word had previously come in 1978, but recent findings show that it had been in use for several years prior to this.

Mrs. Helen Smith: My own feeling about the abortion issue is that it isn’t a question of being pro or anti abortion but pro or anti choice.
— Chicago Tribune, 27 Aug. 1973

Anyway, Sarah Weddington, president of the National Abortion Rights Action League, cut loose at Mrs. McCormack this week with a statement which most people couldn’t get out in one breath, namely: “Her candidacy and campaign techniques demonstrate a pattern to deceive potential contributors by failing to disclose without ambiguity that she is soliciting funds for her presidential candidacy and not for the anti-choice movement [those opposed to freedom of choice on abortion].”
— Nick Thimmesch, Newsday (Long Island, NY), 24 Feb. 1976