The Curious History of "Filibuster"

Last month marked the anniversary of the Senate's first serious attempt to limit use of the filibuster, in which long speeches are deployed in an effort to prevent some sort of action.

Depending on one's point of view, one may be variously in favor or opposed to filibustering, and in similar measure inclined to think the activity akin to its origin: a word for pirates. 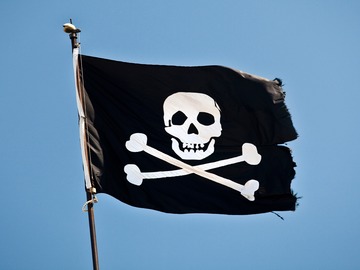 Although little in use today, another word for pirate is freebooter. It comes into English from the Dutch word vrijbuiter, meaning "pirate" made from vrij, meaning "free" and buiter, meaning "booty." The French have a similar word, fribustier or flibustier. The Spanish also have a word which they probably got from the French, taking the form filibustero and referring especially to West Indian pirates.

The term was then extended to other types of troublemakers, particularly to bands of mercenaries organized in the United States which were operating in Central America and the Caribbean trying to take over entire countries (see: William Walker).

Meanwhile back in the Senate, senators were making long and windy speeches and discovering the power of long speeches to slow up or prevent legislation – and in 1853 the term filibuster was used to describe these stunts. A senator from North Carolina rose to object to filibustering in the military sense in regard to activity in Cuba. This drew a rebuke from the senator from Mississippi who accused the North Carolina senator of "filibustering ... against the United States."

The practice of filibustering continued without significant limitation until the run-up to World War I when serious legislation needed to be passed despite opposition from a small minority. In 1917, President Woodrow Wilson's called for legislation allowing the arming of merchant ships to defend against U-boat attacks. The legislation easily passed the House but was defeated in the Senate by a small group of senators. In response Wilson called upon the Senate to change its rules to allow for cutting off debate, and that happened on March 8, 1917.

And so we go from pirate ships to U-boats. And the military escalation regarding filibusters continues to this day. What is the term for a procedural change to eliminate the filibuster? The nuclear option.