1
: the act or process of confecting
2
: something confected: such as
a
: a fancy dish or sweetmeat
also : a sweet food
b
: a medicinal preparation usually made with sugar, syrup, or honey
c
: a work of fine or elaborate craftsmanship
d
: a light but entertaining theatrical, cinematic, or literary work

A "confection" is "confected" from several different ingredients or elements. Most confections are sweet, but the word can also be used to refer to any finely worked piece of craftsmanship. In other words, the lacy box containing chocolate confections can be a confection itself. The verb "confect" (meaning "put together from varied material") comes from Latin confectus, the past participle of conficere, meaning "to prepare." "Conficere" joins the prefix con- with the common Latin verb facere, meaning "to make" or "to do." "Factory," "manufacture," and "benefactor" are among the many relations.

an assortment of delicious cakes and other confections following the main course there were assorted confections so delicious-looking as to tempt even determined dieters
Recent Examples on the Web Up for auction on the website Bring a Trailer—which, like Car and Driver, is part of Hearst Autos—is this gorgeous confection of motoring con brio.

Brendan Mcaleer, Car and Driver, 23 Nov. 2022 The first taste of raw prickly pear is often a surprise to those who have previously only known it as a candy or confection.

Minerva Orduño Rincón, The Arizona Republic, 8 Sep. 2022 Despite the confection catastrophe, there are a ton of new candies hitting the shelves this year.

Skyler Caruso, Peoplemag, 1 Oct. 2022 Roasting marshmallows around a fire had, by then, long been fashionable (the confection became commercially available in the United States in the early 1900s).

Tanya Sichynsky, Chicago Tribune, 14 Aug. 2022 The kids are excited to try the new confection, but all the local stores are sold out.

Mary Colurso | Mcolurso@al.com, al, 22 July 2022 Much of the Krigler fragrance collection is rooted not just in iconic clientele, but the ability to evoke armchair travel in whoever sniffs the latest confection.

These example sentences are selected automatically from various online news sources to reflect current usage of the word 'confection.' Views expressed in the examples do not represent the opinion of Merriam-Webster or its editors. Send us feedback.

Middle English confeccioun "preparation by mixing ingredients, something prepared by mixing, as a medicine or dish of food," borrowed from Anglo-French confectiun, confeccion, borrowed from Medieval Latin confectiōn-, confectiō, going back to Latin, "making ready for use, preparation," from conficere "to carry out, perform, make, bring about, collect, bring to completion" + -tiōn-, -tiō, suffix of verbal action — more at confect 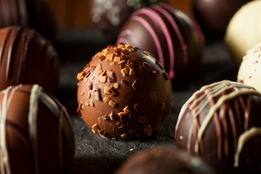 9 of the Sweetest Words for Candy

How to tell your bonbons from your truffles

: a fancy dish or sweet

: a medicinal preparation usually made with sugar, syrup, or honey

More from Merriam-Webster on confection